machine for "360 degree decoding of data matrix printed on bottles" 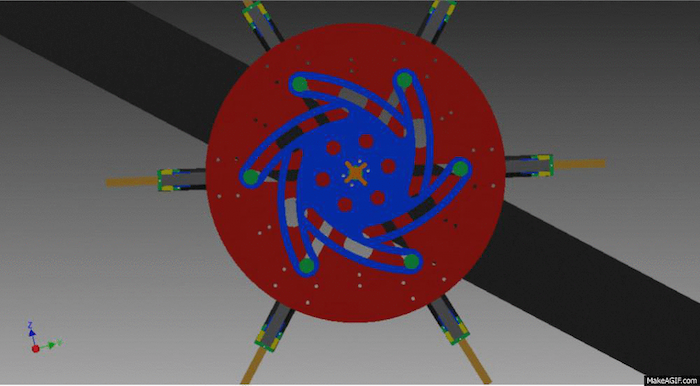 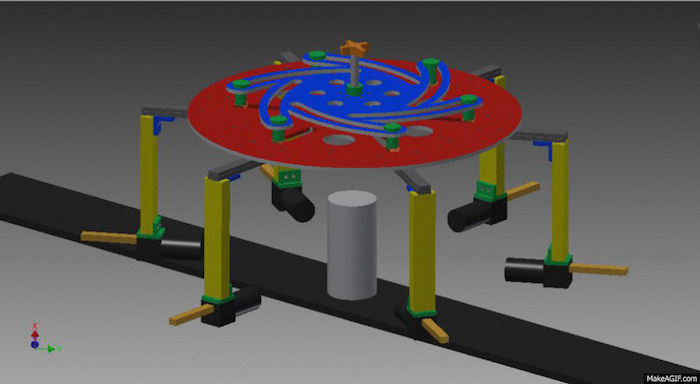 This machine is designed to be used in industries for decoding a data matrix printed on bottles of various sizes. In the system, there are 6 cameras which are used for taking the image of the code from 360 degree (all the cameras are placed symmetrically at 60 degree from each other). This image is sent to the computer where it will be analysed by the software and hence decoded by it. Since there are some limitations on the decoding ability of the software, an image needs to be clear and focused enough to be decoded properly by the software. Hence machine ensures that whatever is the size of the bottle and the code printed on it and wherever the code lies on the bottle, cameras should be able to take image of the code efficiently.

Each camera covers angle of view which is at least 60 degree plus angle subtended by the code on the bottle so that wherever the code comes on the bottle, it falls completely in at least one camera. Depending on the bottle size there is a need to move the cameras in and out in radial direction so that image of the code can be focused properly. This machine serves as a mechanism which enables the movement of all the cameras simultaneously so that there is no need to go to each camera and move it separately. This improves efficiency of the process, gives better results and saves a lot of time as well as human efforts. Manufacturing cost is nominal and prevents us from investing money on expensive cameras which change its focus autonomously.

While designing the mechanism one important aspect that was considered is that there is conveyor which carries the bottles, needs to pass through the centre. So mechanism was designed such that cameras should not come in the path of the bottle on the conveyor. A generalized minimum working distance for ‘n’ numbers of cameras was derived.

The first prototype which was manufactured at SciTech Center, ACG Worldwide, Mumbai in December ’13 can take the images of barcode competently for the bottle size varying from 20 mm to 140 mm. This machine has potential market in pharmaceutical and consumer goods industries where barcodes are used on bottles to keep a record for each and every unit. This is quite essential for preventing duplicity of products. Amneal Pharmaceuticals, one of the US based pharmaceutical companies, has already made orders for the machine.