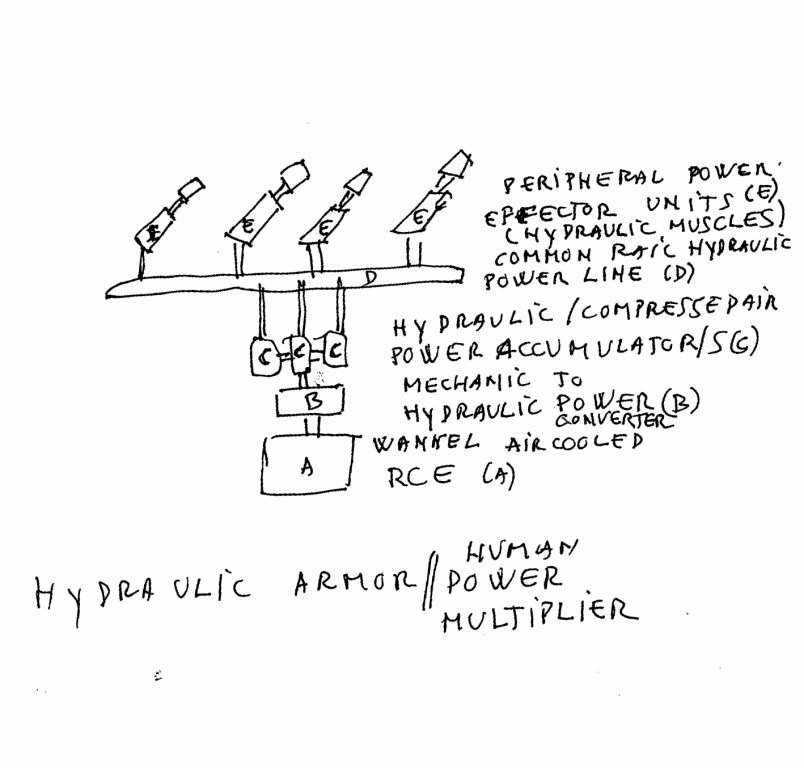 The greatly improved efficiency, power to weight ratio, production costs, emissions, and fuel economy of contemporary Wankel Rotary Combustion Engines allows for its participation in many more uses. So does the progresses accomplished in hydraulic engines, hydraulic power transmission and output devices. In this frame, the possibility can be considered as, the same way a Power Steering ads to the driver’s arm’s power in changing the direction of a car, adequate hydraulic power multipliers could add the power a human person lacks, while keeping the precision of movements a human operator provides.

With an RCE, that could be air cooled, a converter of turning to hydraulic power, an hydraulic or electrical power accumulator, and the adequate hydraulic powered output devices that will be closely controlled by the human operator, a device such as an armor that allows the person wearing it to perform things usually out of his/her reach, as heavy weight lifting could be designed, this is already under development, but the combination of RCE, a turning to hydraulic or electrical power converter, and an energy accumulator was not described as of today, as far as I know. The mechanics of bird’s flight being fully known today, and the fact that the heaviest of the flying reptilians pterodactyls were of 70 kg (155 lb) weight makes feasible the consideration of such an hydraulic manpower enhancer armor being use for flapping, partly human force powered flight, that would have many recreational, industrial and law enforcement uses.