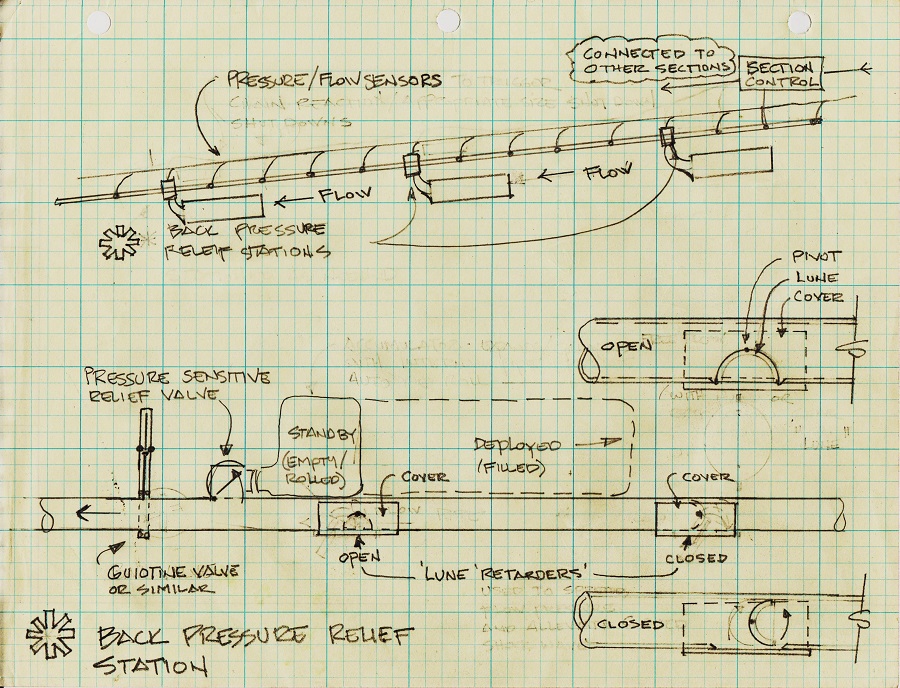 Industrial pipelines carrying fluids, gas (methane) or liquid (oil), are subject to
rupture from natural or artificial disasters. Consequent contamination, fire
or explosion can be alleviated by prompt valved shutdown of the flowing fluid.
Such shutdowns are now controlled by "central computer" systems. There
is a strict limit of how fast this can safely be accomplished since the abrupt
cutoff of flow can cause shock waves in gas and water-hammer in liquids.
Each exhibits great pressure spikes and could cause further ruptures of
the line. Means and method of ameliorating this is described herein.

First: For prevention of the initial shock, one, preferably more, diversion
valve(s) and for each, provide the equivalent of an accumulator, surge tank or gas holder, as appropriate, put in the line downstream from usual shut-off valves. Flow
or pressure sensors are placed periodically along the pipeline and communicate with an "additional controller", possibly integral with the central computer, which controls the valves and retarders described herein.

In operation, upon detection of sudden loss of pressure or increase in flow,
a "fault", the sensors signal the controller to abruptly shut off flow from upstream
the signaling detector and simultaneously open the diversion path, preventing
shock on the line. The additional controller will also signal the central computer to
immediately initiate a normal engineering shutdown of the line slowly enough to
avoid shock. The surge tanks are sized to accommodate, with safety, the expected
volume of fluid which would arrive at the diversion valve a between diversion and before normal shut-off .

Second: To slow momentum, it is desirable to keep the inner contour of the pipe
uninterrupted by anything that would retard flow in normal operation. There should
be nothing that would stop a 'cleaning pig' during normal operation. In general, there will remain fluid within the line after the diversion stage, much greater than needs be accommodated by the surge tanks. To absorb much of the fluid momentum and eventually retain much of the fluid in the pipeline yet keeping the inner contour of the pipe unaffected, make retarders as follows:

Cut the pipe wall, preferably circular and of the diameter of the inside of the pipe,
less twice the wall thickness, halfway through the pipe. The shape that this cuts out, called a lune, with appropriate relief, may be pivoted about an axis through the vertex points which are diametrically opposed to partially or fully block flow. The wall where the lune was cut away may be replaced by welding a covering on the outside of the pipe. An actuator, controlled and powered by the "additional controller" above. Upon sensing a fault, the lune would quickly pivot part way to retard the flow and slowly continue till blocking it altogether. A plurality of these retarders are spaced along the line and trap portions of the fluid at segments along the line's length.

Retarders may take other forms, hinged or cable attached to slow the fluid flow
without stopping it.