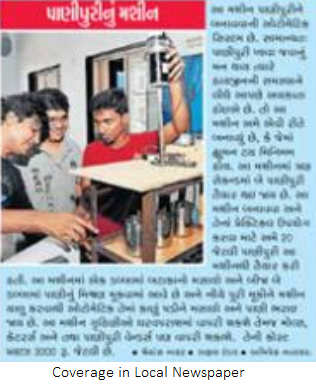 Problem:
India is a nation renowned for its street-food and Paanipuri is one of those delicacies which attracts every Indian. However, lack of hygiene of Indian vendors remains a major concern with this mouth-watering dish. While the number of cases of typhoid, jaundice, cholera and gastrointestinal diseases remain high, the attraction for this dish never dies off. In the simplest terms, Paanipuri consists of hollow, oval shaped, fried and crisp chip stuffed with spiced potato mash and flavored water. The problem of hygiene originates from the way the vendor puts them together with bare hand and the surroundings in which the dish is prepared. Further, the chips are very fragile. A small mistake in making hole may break the whole chip. As panipuri is served individually and only one piece at a time, it becomes difficult to serve many people simultaneously. So there is also scope to improve the speed of serving by parallel stuffing.

Product and Technology:
We have developed a mechanism that automates paanipuri vending process for avoiding human touch making it more hygienic and also retaining its core essence. An attached image shows representative diagram of machine. Crankshaft mechanism driven by DC motor carefully makes holes in chips. The second motor drives rack-pinion pushing pistons in the containers. Thus, stuffed chips are ready within three seconds. The number of chips stuffed per round can be increased by increasing number of outlets from the containers. The micro-controller is programmed to control motor’s rpm for delivering paanipuri without jerks and splashes. Our first prototype was a proof of concept displayed at IIT Gn in April, 2014. Next step is to install units (to be manufactured with food-quality materials) at a few locations in Ahmedabad to record consumer behavior.

Benefits:
This machine will prevent bacteria (Staphylococcus, Salmonella and Shigella etc.) and dirt which gets in due to bare hand stuffing and dipping of hands in the flavored water. With automation also comes an added feature of controllable delivery rate and saves time of serving.

Manufacturing:
The simplicity of mechanism and design allows us to manufacture this product with components available in market (with some minor modifications). An assembly line in 20' by 20' block will be sufficient to make a finished product. Based on estimate of component costs provided by the vendors, this machine will cost less than $75. A manually controllable version can be made by replacing motors with cam-followers. This will cost less than $40.

Marketplace:
The machine is an innovative concept in improving the hygiene standards of street-food in India. It is surprising that there had been no previous attempts on these lines and this will be the first machine of its own type in the market. We see two ways to enter the market: the first is fully automated vending machine targeted at food courts in malls, airports and cafe while other is manually controlled affordable machine for street vendors. With about 10 million street-food vendors in India, we see enormous potential in our innovation.