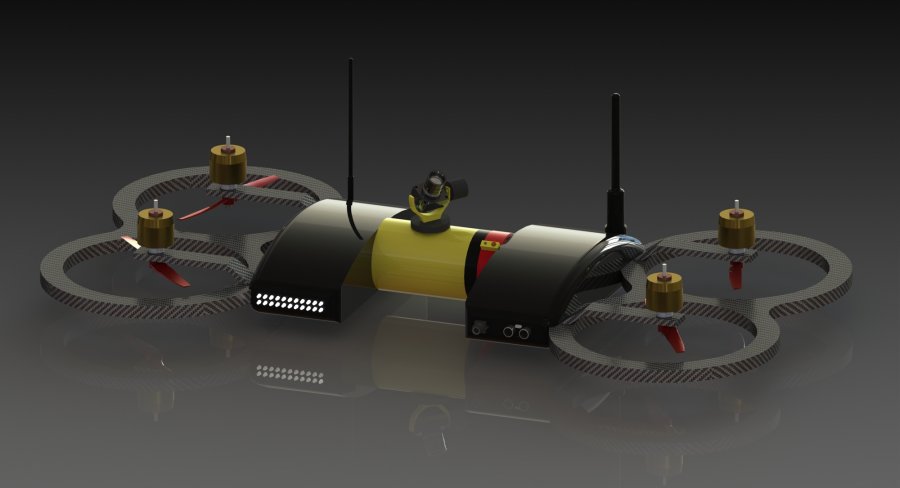 The recognition drone for inaccessible areas was designed to help in the maintenance of areas with poor accessibility to humans, reducing the costs and riskiness, making it perfect for maintenance, monitoring and strategic planning operations in hazardous areas. It can reduce the cost and increase the quality of repairs on electrical lines and telecommunications towers or diagnose a fissure or obstruction in a coal mine or at pipes of air-conditioning systems. It can also be used to monitor and study damaged buildings in danger of collapse or fire, in order to find better strategies without risking the lives of firefighters and engineers.

The DRIA is piloted by two technician: a pilot, which will be responsible for controlling the drone and avoiding collisions; and an operator who is responsible for data acquisition and analysis in real time. The DRIA contains a VGA video camera for the pilot, ultrasonic sensors to indicate the distance to the nearest wall and a high-definition camera with optical zoom and three degrees of freedom to obtain high quality images to be used for later analysis or in real time. It also contains a high power laser that scans 360 degrees around the drone and sends the data for an external computer in real time, which will be plotted on a cad type program, point by point. These data will be used to create a 3D virtual environment and through a data processing will result in a diagnosis for possible failures.

The DRIA control, data reception and processing of data will be made in a van equipped with a high-power antenna, workstations, screens and a mini cockpit for the pilot. Three other smaller radio antennas should be placed around the site where the DRIA will be used so it can make a triangulation and have its position accurately.

Made with high strength plastic and carbon fiber, the DRIA has its four propellers protected from possible collisions, reduced size, an electronic circuit embedded with radio transmitters, a VGA camera, a HD camera, four ultrasound sensors, a laser and an optical receiver.