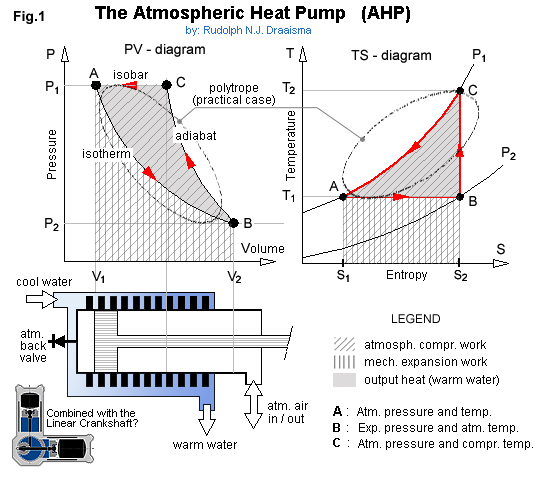 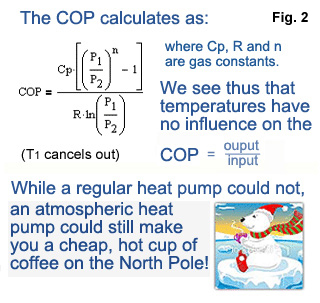 The Industrial Revolution started with James Watt's steam engines, but did you know they were atmospheric ones? It was not the fuel that gave the output work of his machines, but the atmosphere instead. The fuel was only needed to generate steam and an under-pressure by condensing it, against which the atmosphere did the greater work - it's an established fact!

With today's sophisticated technology, we now can make well-sealing pistons in as good as perfectly round cylinders, not possible in Watt's days. This allows us to create an under-pressure by pulling out a piston in a cylinder, at far lower power need than for generating steam. For recompression, the atmosphere of course does the same specific work as it did for Watt against the same under-pressure (we can get far lower pressures today).

In Fig.1, the piston initially is in position (A), enclosing trapped air in volume (V1) at atmospheric pressure (P1) and ambient temperature (T1). When the piston then is drawn out to position (B), the air's volume expands to (V2) at a lower pressure (P2), but its temperature doesn't change, because the air didn't do any work - we did work on the atmosphere instead. Next, the atmosphere recompresses the air, moving the piston to position (C), while doing work on the air, thus causing it to get hot (T2), but is still not at the end of its stroke. From this point, where the atmosphere did as much work as we did, any further motion of the piston would require us to do additional work, BUT, by cooling off heat, the trapped air's volume decreases, tending to lower its pressure, so the atmosphere can continue to drive the piston to end of stroke, back to position (A), thus closing the cycle (ABC). The extra work that the atmosphere does from (C) to (A) is our surplus, more than we had to put in from (A) to (B) and it comes from the surroundings, solar heat, stored in the atmosphere. It's the same for regular heat pumps, just that they create a lower temperature with CFCs, while the AHP creates a lower pressure instead with air only - can it be more environmental friendly?

In practice however, the cylinder simply gets hot, heat being cooled off all the time, and so the process doesn't follow the ideal isotherm-adiabat-isobar lines of the diagrams, but instead something along the oval (polytropic) path as shown. During the expansion strokes, some air will leak over the piston seals into the cylinder, so a back-valve is needed at the cylinder top, to prevent the end-pressure to exceed the atmospheric one. To keep piston friction, and by that the machine size down, a linear crankshaft can be used as shown (my "re-invention", patented already decades before I was born - US 2166975). I made a model and it worked!