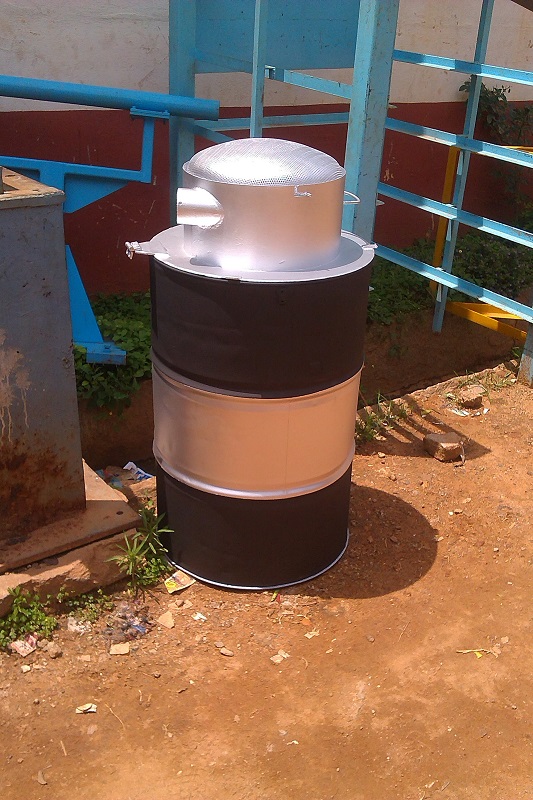 Trash-a-nator is a device used to reduce the garbage produced. Here in India, disposal of garbage has always been a problem. People dump garbage on public grounds and segregation is not yet implemented. Apart from public waste they are dumped in land fills in an I'll mannered way because of which foul smell is produced affecting the settlements close by.

In the device you can put up to 50kg of domestic garbage like plastics, food packets, covers etc as long as it contains very less or no water content. Disposing food isn't preferred as waste food should be made into compost.

After putting your garbage, waste paper is used as fuel here which lit by a match stick. Hence no fuel or electricity is required. Close the lid and the burning starts. The problem with traditional burning or road side burning as called in India, plastics releases harmful toxic gases upon burning. To prevent this I have placed an electric blower which blows in air, essentially oxygen, into the system thereby converting the harmful lower oxides to more stable higher oxide for example carbon monoxide is converted to carbon dioxide.. It takes about two hours to burn a full capacity load and at the end of burning there is approximately 10% ash which is left which has to be disposed. While burning there is no smoke and foul odour produced and doesn't harm the environment.

Also the burning releases a lot of heat, to utilize this energy I have placed a vessel on top in which you can put water and boil the water.

The main purpose of the device apart from burning your garbage you can attach a turbine to the vessel in which water is boiling and the steam generated can rotate the shafts of the turbine thereby producing energy.

The entire unit excluding the turbine is small hence making it mobile. The material used are, an old oil drum mounted on a stand with wheels. The system Insulated using asbestos lined wooden planks and heat resistant paints. A small 300 watt blower is fixed behind.

Hence this device uses a form of energy to destroy garbage but uses the energy released to create more effective energy easily and most importantly it is very affordable. The unit excluding the turbine and water vessel costs 10,000 Indian rupees ( 170 USD approximately)