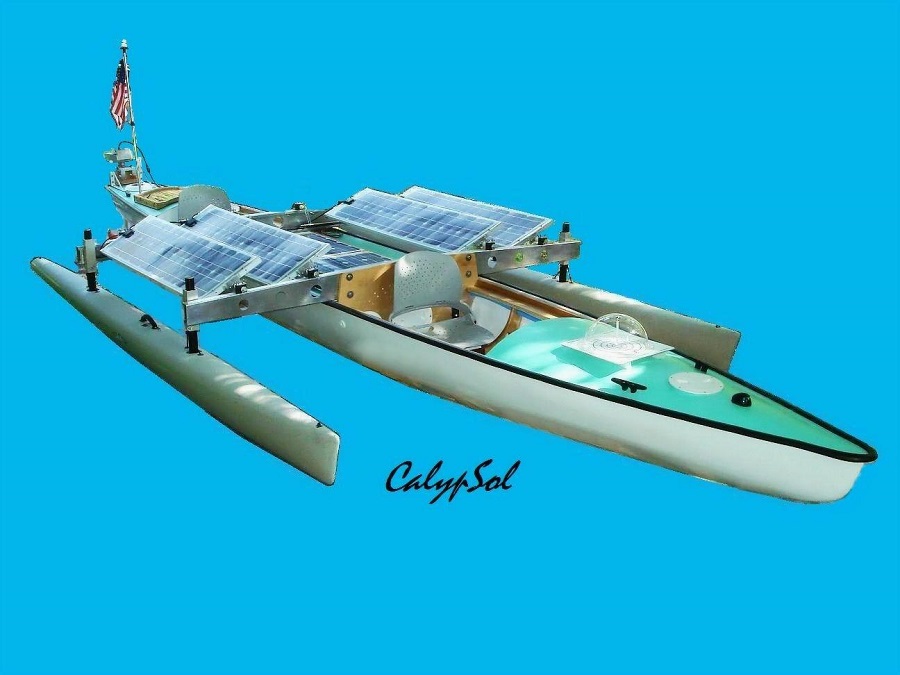 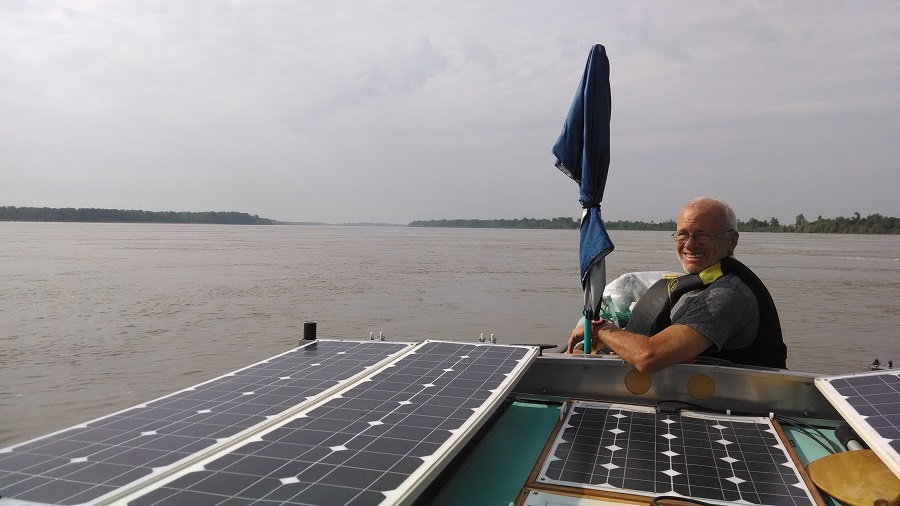 The CalypSol trimaran is a high-tech solar powered eco-friendly boat built to promote the use of renewable sources of energy and advocate a clean environment. On June 11, 2014, the CalypSol crew reached Baton Rouge, LA , thus completing 1’450 miles from Chicago, IL to successfully become the first solar powered canoe voyage down the Mississippi. The voyage took Raymond Christe and Jean-Claude Barras.Torrential rains forced the determined navigators to weather out the storms ashore in Helena, AR. This gave them a chance to talk with the very hospitable and friendly local folk and to be interviewed on the Radio Show of legendary Sonny Payne [KFFA AM 1360]. They resumed their trip on Saturday May 31 braving the turbulent waters of the Mississippi and sleeping on the beautiful sand banks and shoreline wilderness that stretch for hundreds of miles. Sunsets and sunrises were spectacular. With the River level dropping at a rate of a foot per day, once anchored for the night, the CalypSol had to be periodically pushed away from the bank back into the water. This was mandatory to prevent finding the craft resting high and dry the morning with the formable task of pulling and pushing the 450 pound craft back into the water. Some days, the barges traffic was low. To the CalypSol crew it felt like the entire Mississippi belonged only to them. On other days it was more stressful, dealing with the barges, predicting their movement and avoiding the high waves produced by the 10,000 horsepower thrust of some tugboats. It was not uncommon to see tugboats pushing strings of barges up to 5 wide and 9 long.

With the absence of light contamination from cities, most of the nights were filled with Stars, but also with strange sounds from deer, wild boars, coyotes, frogs and bobcats. Often, in the middle of the night, some animal could be heard in the campsite or one not far away giving off a shrill cry. The songs of multiple bird species would wake up the crew every morning announcing the new day on the river. A typical day would start at 6:00am with breakfast, a light lunch was taken on the water, and about 4:30pm the crew would start looking for a place to moor for the night. Navigation distance varied from 30 to 50 nautical miles per day. The small Torqeedo outboard motor of the CalypSol functioned perfectly and reliably during the entire voyage. A reception took place at the Swiss Consulate in New Orleans, LA, celebrating the successful voyage from Chicago, IL to Baton Rouge, LA, on the first solar powered trimaran canoe.