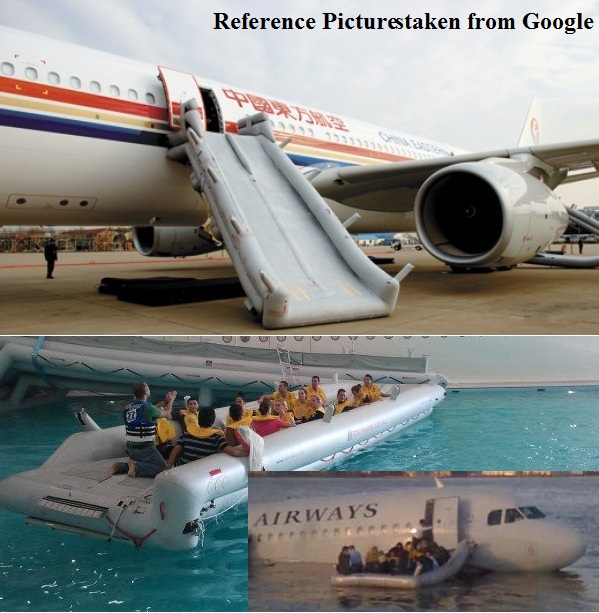 Abstract:
Evacuation slides in airplanes are only used for evacuating people during an emergency situation. My idea is to use these slides to save people from an airplane crash as well as to identify the spot where the plane has crash landed.

An evacuation slide is similar to a aircraft life jacket but just bigger in size. It is a 3 meter long canister of composed carbon-dioxide and nitrogen which delivers initial boost to the cylinder and the cylinder meter out the gas at 300psi the gases are forced the gas through a narrow gap which causes them to accelerate rapidly this acceleration creates a vacuum that then sucks enough ambiance air to inflate the slide the entire slide in inflated in 3-5 seconds. This 30 square meter of material is folded precisely to measuring half a square meter.

Quick review of the current circumstances:

For instance lets imagine a plane crashing into an ocean. During a crash landing numerous outcomes are possible, either the flight might explode or it could have a safe water landing and even after a safe water landing there are many possible outcomes ultimately the flight will sink obviously. Will life jackets save the lives of the passengers? After a few hours the plane would sink and there wont be any evidence of the flight being crashed at that spot making it difficult for the rescue operators to identify the spot where the plane crash landed. As time passes people who survived the crash would be freezing inside the cold water leading to hypothermia therefore restricting their chances of survival. And goes on until the rescue operators finds the spot. To avoid these loses, to reduce the death of the people as well as to increase the chances of the rescue operators to identify the spot at which the plane crashed.

Explanation of my suggestion:

My main and basic objective of this project is to reduce the chances of peoples death due to hypothermia as well as a way to quickly identify the spot at which a plane has crashed. This is where Evacuation slides come into play, taking into the points/assumptions that
(1) These slides can inflate in 3-5 seconds which can be executed right before the crash landing.
(2) It is hard as a rock and one slide can hold upto an average of 30 persons on water.
(3) The fully inflated slide is 31 feet long which is the average size of a boat, and it can be easily identified but the rescue operates if they start their search from the point where the flights signal got lost on the radar.
Therefore if we construct the evacuation slides to be easily ejectable (slides which are fixed with the airplane) we can create a chance of saving lots of passengers. Manufacturability is also very easy because it only requires a little change in the construction.