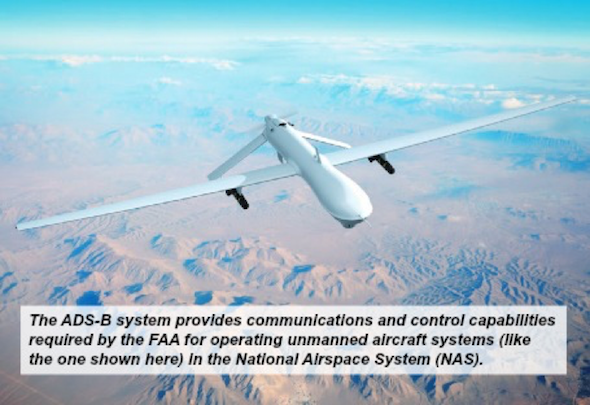 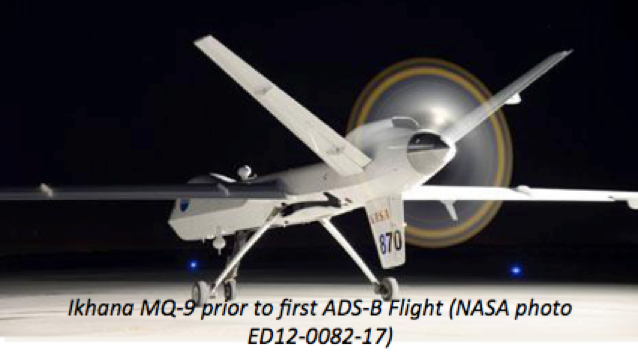 I have developed an integrated communications and control system for unmanned aircraft systems (UAS) that utilizes automatic dependent surveillance broadcast (ADS-B) technology. The system addresses safety concerns relating to UAS sharing airspace with traditional manned aircraft. This state-of-the-art system is capable of real-time situational awareness (e.g., air traffic, weather), updates in three-dimensional trajectories, and can be reengineered for specific mission operations and applications, giving the user a customized experience. The ADS-B system detects and tracks intruders; evaluates and prioritizes threats; declares and determines required action, and then communicates the determined action to the UAS pilot. The system’s ability to integrate various components for enhanced communications, command-and-control operations, and efficient sense-and-avoid capabilities addresses many of the technical barriers related to the safety and operation of UAS in the National Airspace System (NAS).

THE PROBLEM MY SYSTEM SOLVES:
Currently, commercial use of UAS is constrained by regulatory issues based on multiple safety concerns. In order to meet these challenges and in response to increasing demand for civilian operation of UAS in the NAS, the Federal Aviation Administration (FAA) is currently developing new policies, procedures, and approval processes. My system addresses the regulatory changes by providing ADS-B Out capability along with communications and control capabilities that are superior to currently available offerings.

The FAA participated in four successful open-loop flight demonstrations that validated the system’s ability to transmit and receive ADS-B data and an enhanced situational display with multiple targets. The last two tests demonstrated the system as a whole-- ADS-B Out and ADS-B In. These tests indicate that this system will integrate into the NAS efficiently.

The technology offers a combined hardware and software package that improves safety, enhances command and control, and offers improved operational capabilities including situational awareness, conflict detection and alerts, and navigation.

HOW IT WORKS: The system is built around a Garmin GDL 90(TM)/88 Universal Access Transceiver, which is independent of other aircraft avionics and requires only a power feed from the aircraft. The software interface uses the standard ADS-B message protocol, and the system architecture is designed with a lightweight tablet display for general aviation use.

This system allows ground-based UAS operators to receive the ADS-B In signal over their UAS telemetry signal and deliver it to the sense and avoid software, installed on a laptop or tablet situated adjacent to the operator’s typical UAS video and other displays.

The system is compatible at both 978 and 1,090 MHz and projects real-time satellite three- and four-dimensional imagery using Internet network links. The technology is easily reengineered for specific missions and applications.