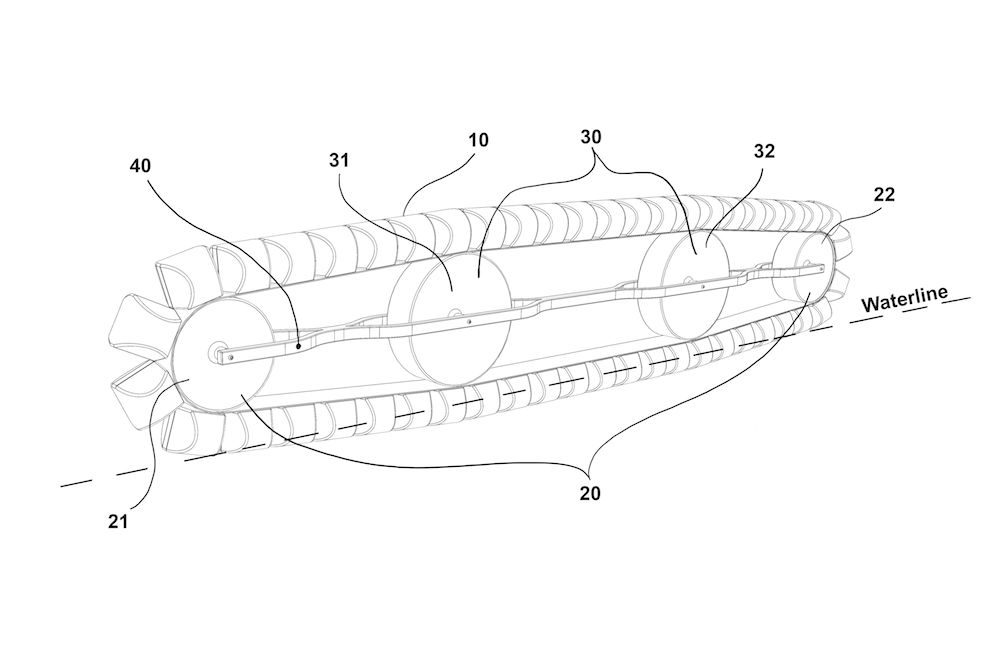 Wheels eliminate friction because the contact point on the wheel and its rolling surface advance together. But boats displace water unless they plane or hydrofoil, which require high power inputs. So how is the wheel's efficiency made relevant for watercraft?

First--as known since 1866--a pair of wheels used as turnarounds for a floating track eliminate relative motion between the bottom-most points on the turnarounds as the floating track cycles. But that will concentrate relative motion--and so turbulence and wave-making in addition to water friction--where the turnabouts direct the floating track into and out of the water. Surprisingly, it's taken almost 150 years for our species to see that by setting up a slow-motion descent into the water for the flotation--and a slow-motion ascent as it exits the water--that relative motion, and thus wave-making and turbulent resistance in addition to water friction, can be reduced by over 90%.

And so a second strategy is needed: A slow-motion entry and exit for the floating track is produced by positioning the end turnabouts to deposit the track at the waterline while setting up a second pair of turnabouts to position the floating track at full draft where it forms the keel. The relative speed of the flotation/water interface can thus be adjusted by adjusting the angle set up as the flotation travels between the waterline and the keel line. Hydrodynamic resistance can be nearly eliminated. Period.

Of course, other challenges result from this strategy: relative aerodynamic motion increases by the amount that it's eliminated in the water. And mechanical friction, which is not a factor in traditional hull designs becomes a concern with a "reel boat." Plus the flotation is planted. Nevertheless, all things considered my numbers indicate a 5-600% efficiency gain over catamarans. (The first reel boats will have catamaran-style waterlines, and since water is 800-1,000 X denser than air, the main trade off gives the reel boat a big head start.)

2/3 of our planet is covered by water. 90% of international trade is conducted via water. The slow-motion/no-motion water interface will protect wildlife and fragile shorelines. The low-power needs of a reel boat will make battery power feasible for longer trips and larger vessels. It's time to revolutionize water transportation!