Suction Pump as an Alternate For Car Seat Belt 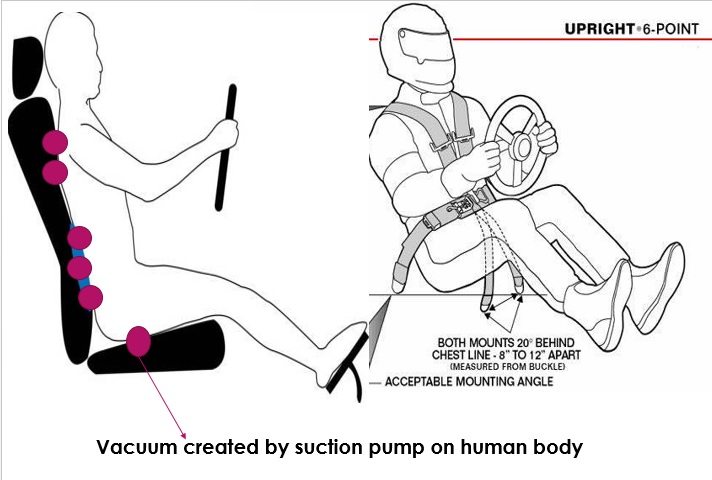 We have designed a car seat by using Pro/E Software, later used analysis on it using Ansys 14.0. We have done study to Use Suction Pump on Seat Car as an alternative of Seat Belt and Air Bag that works during Accident or Crash in almost every ordinary , luxury car or Performance Car.

A seat belt, also known as a safety belt. It is a vehicle safety device designed to secure the person sitting in the vehicle against collision or a sudden stop.But there is some Disadvantages of using Seat Belt, they are fibres of the seat belt can cause harm to the chest and abdominal areas,it may also cause more serious damage to the internal organs like tearing of the colon or diaphragm,Children are at the highest risk for seat-belt-related injuries and should be closely monitored after a car crash even if they appear unharmed at first glance.

An Air bag is a vehicle safety device it consisting of a flexible fabric envelope or cushion designed to inflate rapidly to provide protection to the body during an auto-mobile collision but it also have some disadvantages that they are the speed at which the air bag deploys can sometimes cause whiplash, potentially fatal head and chest injuries or concussions;Once the air bag are use you can not reuse them and have to pay for the new one to replace them.

To overcome these problems We will introduce vacuum created suction pump rather than seat belt & air bag,create the suction which is capable of holding the person on the seat of the car during Accident or Crash;as on fig. Pink Circle shows on different areas where pump will be inserted from the back side , vacuum pressure created on these areas & Pressure acting will be different from top to bottom to hold the person on seat car.

We can maintain the amount of suction that we can produce by the vacuum pump with the help of the sensor and increase or decrease the pressure according to the person weight.

Advantages on Using Suction Pump Of Seat Car
1.Seat belt & air-bag can be replaced.
2.Children can use them easily.
3.Automatic safety by suction can be use.
4.We can also use them on bikes and scooters so person on the back of the seat , won't threw away during sudden brakes.
5.Economically it will be more useful.