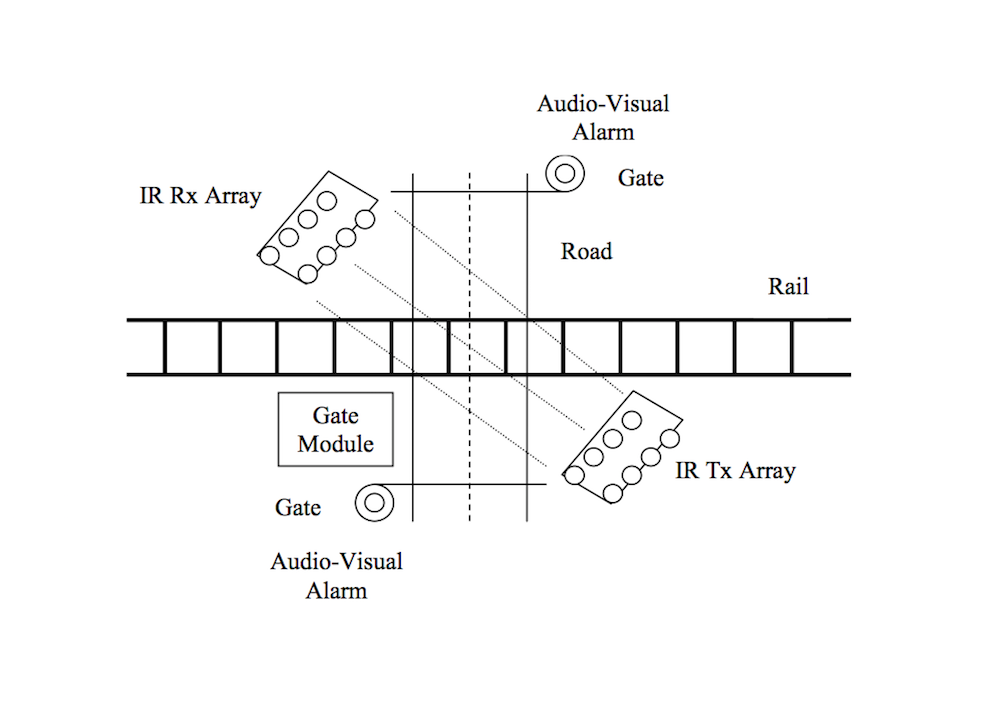 Of the 38,000 level crossings (Rail-Road Intersections) in India, 50 % are unmanned. There is a steady increase in the number of accidents (about 35 per cent of the train accidents) occurring at unmanned level crossings (ULC). Apart from disrupting rail and road services, loss of lives, vehicles, properties, and other materials, these accidents had caused a loss of 7.8 billion INR to Indian Railways during the past five years (Source: "The Hindu" Newspaper). State-of-the-art wireless communication (GPS and GSM), Infrared Sensor, and Embedded System based solution to reduce these accidents has been developed by me.

This design provides more reliable, feature-rich, and lower cost solution for Automatic Gate Control as well as for Approaching Train Warning System when compared to alternative means such as constructing flyovers, road under bridges, limited use subways, reducing the speed of the road vehicles by putting speed breakers, converting ULC into a manned one, joint ambush check level crossing by law enforcing agencies, etc. The audio-visual warning is provided to both road users and train driver.

The train is installed with GPS and GSM devices, while the gate is installed with GSM device only. As the gates are stationary, just entering the latitude and longitude co-ordinates of the gates into the system once is sufficient to know their positions. The GPS device in the train provides current position & speed of the train. From this, the distance between the train and an approaching level crossing is calculated. Different audio-visual alarms are generated depending upon two factors i) the distance of the train from the gate ii) the time (estimated from speed of the train) to reach the gate. Emergency action is taken based on whichever (distance/time) crosses its lower limit (i.e. closer to the gate) first.

A safety protocol is used to signal/warn train, open/close the gates, and to provide different audio-visual alarms/signals to road users depending on the train distance/time to reach ULC, presence of obstacles at ULC, and time to clear them.

The block diagram of the overall setup at ULC and the developed prototype are shown in the figures. Train module features i) Status indication of object present/absent at the ULC to the train driver and distance of the train from approaching gate, speed of the train, safety/danger zone indication number, ii) Configured for dedicated rail route for identifying the positions of all gates present in that route. Gate module features i) Infrared sensors detecting the presence/absence of objects/vehicles/humans at the ULC, gate open/close, road signal (amber, red), train signal (green, red). Both train module and gate module periodically exchange these information for various monitoring and control operations.