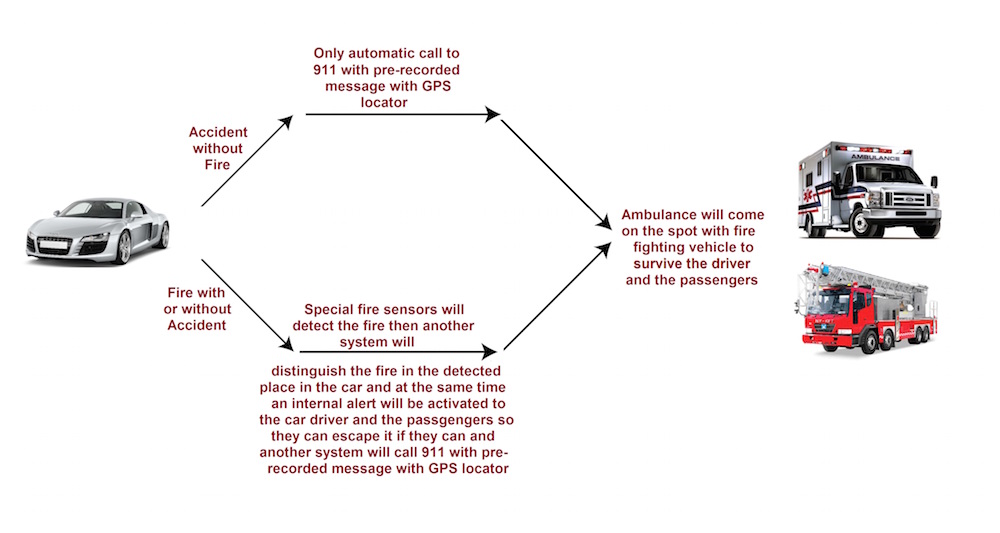 This system is designed to protect and ensure the survival of the driver and the passengers in any car that has an accident either with for without fire.

Let's say that there is a car which have this system had an accident but without fire. Here this system will let all the doors to be opened and the all the windows to be opened to the maximum position , at the same time a programmed phone will call the emergency no. which is the 911 with auto pre-recorded message with GPS locator that "There is an accident in the place located in X place as per GPS locator."

If the same scenario happened but with fire. Here a special fire sensors will detect the place of the fire in the car and trigger another system to distinguish this fire with special tools installed inside of the car in different places in the car.Then simultaneously an alert will be activated through the interior compartment to let the driver and the passengers to escape if they can but here after that the same result in the first scenario will be performed on the spot.

Furthermore in both scenarios as per the attached illustration the Ambulance with fire fighting vehicle will come together as per the pre-recorded message to 911 to survive the driver and the passengers from this accident and extinguish the fire if it's still burning the car as a back up plan.

As a result this system will increase the safety to each of driver and passengers, moreover it will let much more people survive.