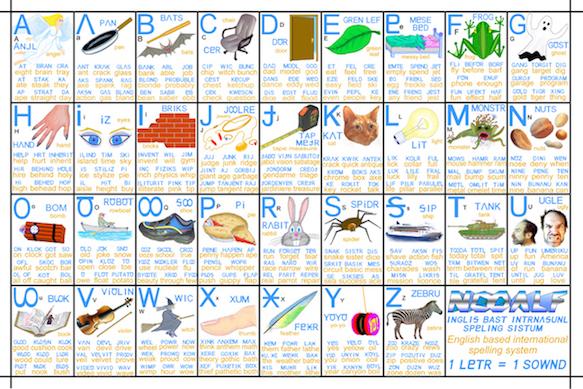 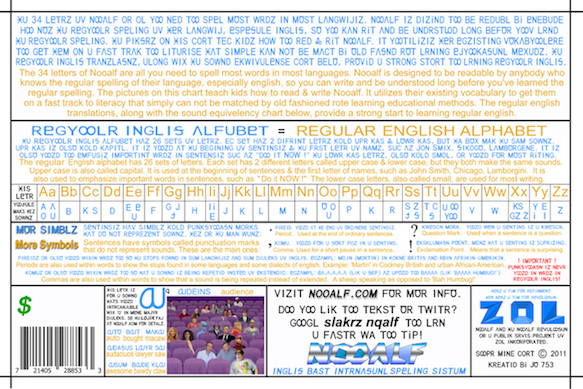 The Nooalf English-based international spelling system is a 100% phonetic system that can be learned within a month by children using the available picture/letter/sound charts. Literate adults can already read Nooalf spelling since it looks similar enough to traditional spelling in English, Spanish, Italian, German and many other languages that use the Roman alphabet.

The main benefit of this system and the products that teach it is a greatly improved level of literacy and drastically reduced literacy training costs for schools. Preschoolers can learn it before beginning kindergarten, making it far easier to learn traditional spelling. The charts provide an introduction to traditional spelling that utilizes the foundational logic of Nooalf rather than simple rote memorization.

Since English is the defacto international language, the system also provides a quicker path to competence in English for foreigners.

The system is also extreemly helpful to dylexics; even better than Italian which, even though it is only about 90% phonetic, native dyslexics are often completely unaware of their condition due to the clear relation between speech and spelling.

The main consumer level product is the Super Mini Chart. It teaches the Nooalf spelling system and introduces traditional English with hundreds of sample words and a comprehensive chart that shows the most common ways sounds are represented in traditional spelling.

This product is an ergonomically advanced spelling system for a technology (writing) that has been left mostly to chance and tradition over the millenia with far less than optimal results. Writing is the fundamental technology that enabled civilization to begin and flourish. All other technology is dependent on it, therefore any improvement to it can be expected to improve many aspects of our lives.