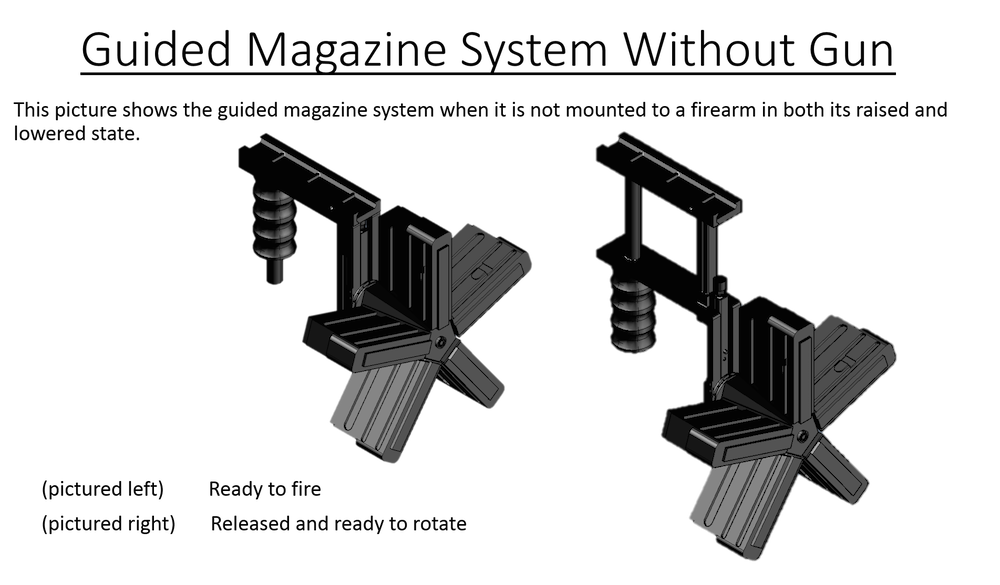 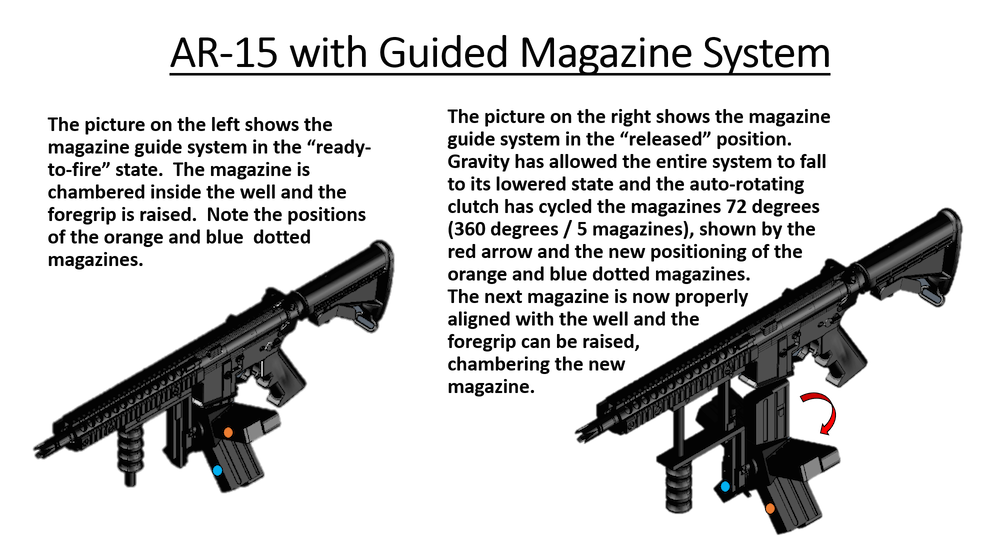 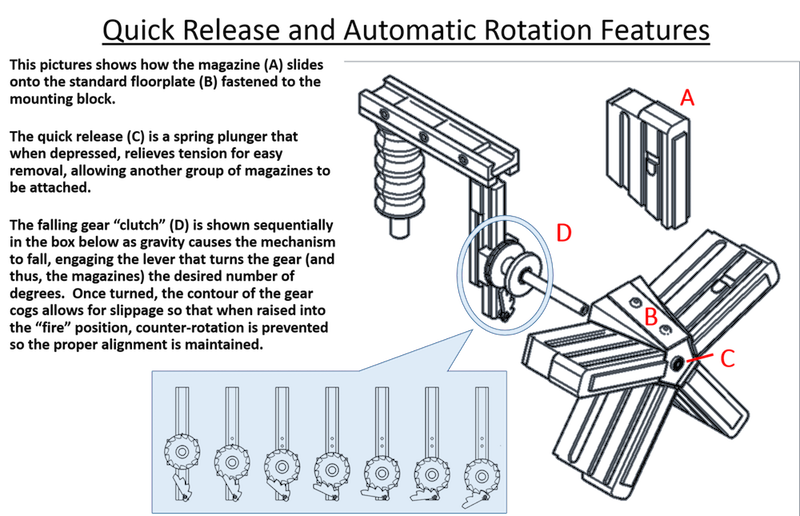 Gun magazines that can hold more than 10 rounds of ammunition are generally considered “high capacity” magazines. Laws in multiple states prohibit these high capacity magazines for civilian use. In order to still be able to carry a lot of ammunition, civilians are forced to carry many 10-round magazines creating unnecessary bulk, weight, risk and tediousness when trying to rapidly load/unload ammunition into a firearm.

To solve these problems, I have invented a guided magazine system made of a durable plastic or metal that attaches to the handguard rail of a firearm (such as an AR-15) allowing the person to use their standard magazines they already own (versus having to buy other specialized magazines) and slide them directly onto mounts of a central block. When the magazine is released, gravity forces everything downward, where an automatically rotating clutch on the guidance system advances the next magazine in proper alignment, so that by merely raising the foregrip, the new magazine is loaded into the gun well.

The benefits of this invention are that ejection and reloading are faster and easier, and can be done without visually disengaging from the target since alignment is substantially built into the guidance system. This, combined with the shooter’s hands remaining in contact with the gun at all times, saves valuable time that could potentially save lives. It is rugged, simple to use, and can be fitted to a wide variety of firearms.

The guidance system is very adaptable, allowing for 2 or more magazines to be attached, based on preference. It is anticipated that a 5-magazine system would be preferred by most users to optimize the total capacity/weight ratio, so as to allow for 50 rounds of ammunition without the unit being overly heavy to prevent tactical maneuverability. The magazine-mounting unit is also equipped with a quick-release button to allow the user to remove all 5 magazines at once and mount a new preset 5-magazine unit in seconds for even faster reloading.

There is currently nothing like this on the market that allows the use of standard magazines, an auto-rotating system, proper alignment guidance, and/or a quick release unit. The system described here would be for civilian use, however the concept is adaptable for higher capacity magazines for military and police.

Estimated market potential is $3-5 million the first year with expected increase with word of mouth and demand as more states/countries impose magazine capacity restrictions. The market encompasses any barreled firearm owner (including cross-over into novelty gun and gaming enthusiasts, like Airsoft® guns.) The primary target markets initially in the US would be California, Colorado, Connecticut, Maryland, and Massachussets which already have bans on high capacity magazines. Production would be casting and CNC machining at an estimated cost of around $85 per unit. The retail price of around $200 fits within the scale of larger firearm accessories (usually $200-300 each.)