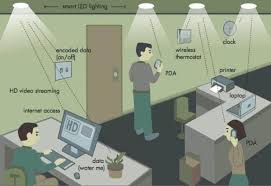 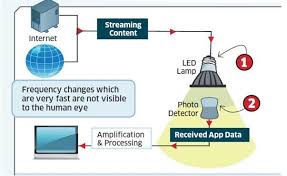 Li-Fi (Light fidelity) is a wireless technology which is based on light as its name indicates and not on radio waves. Li-fi is the wireless communication system in which transmission of data is through illumination. Li-Fi technology uses LED (light emitting diode) to transmit the data wirelessly. It is the fast and cheap optical version of the Wi-Fi. By comparing the speed of Li-Fi with superfast broadband system which is 250 times faster. As a replacement of Wi-Fi modems, Li-Fi would use transceiver-fitted LED lamps that can glow a room as well as transmit and receive information.

Li-Fi technology has higher potential, it is very much possible to transmit the data via light by changing the flicker rate that provide different strings of 1 and 0, and its intensity is modulated so quickly that the human eyes cannot notice. There are around 19 billion light emits worldwide. Which in turns may be replaced by LED, i.e. potential source of transmitting data. Very simply, if the LED is on, you transmit a digital 1 if it’s off, you transmit a 0. They can be switched on and off very quickly, which gives nice opportunities for connectivity and transfer the data very quickly, efficiently and accurate without any external hindrances.

So what you require at all are some LEDs and a controller that code data into those LEDs. We have to just vary the rate at which the LED’s flicker depending upon the data we want to encode. Further enhancements can be made in this method, like using an array of LEDs for parallel data transmission, or using mixtures of red, green and blue LEDs to alter the light’s frequency with each frequency encoding a different data channel. Such advancements promise a theoretical speed of 10 Gbps –meaning you can download a full high-definition film in just30 seconds. But blazingly fast data rate sand depleting bandwidths worldwide are not the only reasons that give this technology an upper hand. Since Li-Fi uses just the light, it can be uses a fly in aircrafts and hospitals that are prone to interference from radio waves. This can even work underwater where Wi-Fi fails completely, thereby throwing open endless opportunities for military operations. Imagine only needing to hover under a street lamp to get public internet access, or downloading a movie from the lamp on your desk.

Radio waves are replaced by light waves in a new method of data transmission which is being called Li-Fi. Light-emitting diodes can be switched on and off faster than the human eye can detect, causing the light source to appear to be on continuously. A flickering light can be incredibly annoying, but has turned out to have its upside, being precisely what makes it possible to use light for wireless data transmission.

If this technology can be put into practical use, every bulb can be used something like a Wi-Fi hotspot.