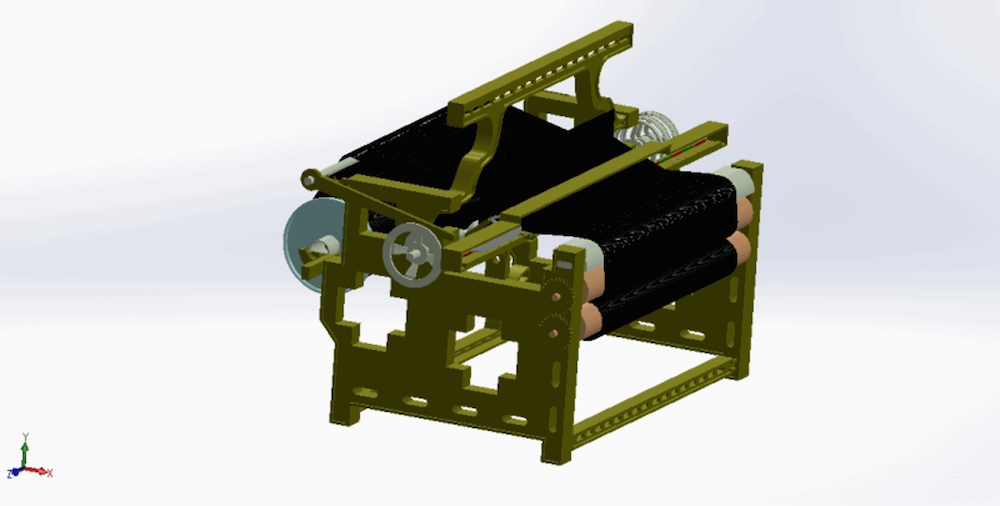 A powerloom was designed by Edmund Cartwright in 1785 .The control of powerloom is controlled by a line shaft. The purpose of powerloom is to weave the clothes which is used for different purposes. The main components of loom are warp beam, take up roll, shuttle, reed, heddles, cam, line shaft, pulley, dead weight.

SHUTTLE
The shuttle is the heart of the loom which makes the warp and weft to intersect with each other based of the requirement pattern.
The shuttle movement can be controlled with the cam and follower rotation which will controlled by speed of the line shaft.
The three main operations involved in loom are,
1. Shedding
2. Picking
3. Battening

SHEDDING
Shedding is the raising of the warp yarns to form a loop through which the filling yarn in the shuttle will pass. Shedding can be done with the cam rotation.
The weave pattern determines the shedding thus cam should be designed based on the weave pattern.
The shedding operation helps the loom to convert the warp yarns in to cloth. The cam is used to make shed (or) loop like shape in to which the shuttle moves to and fro to make the weave.
The speed of the line shaft controls the shedding movement and after which the picking and battening will done.

MAGNETIC LEVITATION
Magnetic levitation (maglev) is concept in which the movement happens due to attraction and repulsion nature of the magnet.
The superconducting magnets are placed consequetively and the sequencing of order is programmed hence, the linear (or) rotary motion is done.
Maglev concept is used for picking operation in the loom instead of cam and follower.

• Cam and follower is eliminated with magnetic levitation, hence the wear and tear of the material and breakage of material also reduced
.
• Production rate can be increased.

• The throwing of shuttle away from the shed path if any yarns breaks can be avoided by implement maglev concept.

• The sequence of operations can be carried out with program, hence the colliding of shuttle with reed during picking and battening can be avoided.

• More number of moving parts in ordinary conventional loom is reduced by introducing the concept of magnetic levitation.