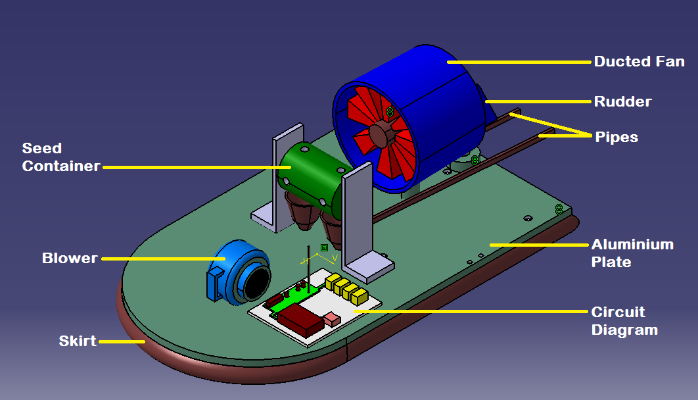 Agriculture in India is facing a decline, reason being, inefficient farming methods and labor scarcity. Nirvapana means sowing in Sanskrit. In India, Broadcasting of pre-germinated seeds is the common practice of sowing where farmers walk around the field and toss the paddy seeds on to the field. One of the major drawbacks of this technique is that since crop and weeds germinate together, weeds compete with the paddy for the available water, nutrients, space and light. In addition, to maintain the plant population farmers go for higher seeding rates and end up using twice the amount. A drum seeder is a simple manual sowing device consisting of a cylindrical drum attached to a central shaft having wheels attached to both sides of the shaft.Thus we came up with our design integrating a drum seeder into an unmanned hovercraft.The benefit of this hovercraft idea is that now, the work done by the farmer is tremendously reduced; he no longer has to go into muddy field along with lots of laborers; instead all he has to do is control the craft through the remote and make sure that the device is moving in straight lines. The device was made to move a distance of 5 meters on a level floor to simulate the seeding process in a line.Any change in direction was corrected by the rudder . When the seed drum was rotated by the synchronous motor, which gets activated by the forward motion of the hovercraft, seeds were discharged on to ground with approximately required spacing. Uniform motion was achieved, and sowing was able to be done in straight line of 10 meters in less than 2 minutes, with right spacing in between. Conducted a survey that covered the target area. Accordingly, process of traditional farming followed here includes two steps. The process of broadcasting takes 24 manhours of work to cover one hectare of the field. Second step; transplantation is done after 18- 20 days, takes 320 manhours/hectare. So the complete process takes 344 manhours/hectare. Labor rate of the area is $1.25 / hour. Thus we have $520 as labor cost alone per hectare. Incredibly the final prototype is estimated to take 40 manhours/hectare to complete same task more effectively costing us 60$. Cost incurred in producing our prototype was $125 which is a onetime investment. People of the area has 24x7 access to stable power supply of 240 V @ 0.08$/Unit. The power rating of our machine was found to be 800W. On operating the machine for 40 hours, the energy consumed is 32 units producing a 5$ bill. In total, operating cost will be $65 per hectare. We are concentrating on Kerala as our primary market where soil in the paddy fields is soft and weightbearing capacity is low. So if our product works well here; it works everywhere.Our funding has been guaranteed by NABARD (National Board of Agricultural Research and Development.) and thus manufacturing will be done for us by RAIDCO, Kerala (Regional Agro Industrial Development Corporation).