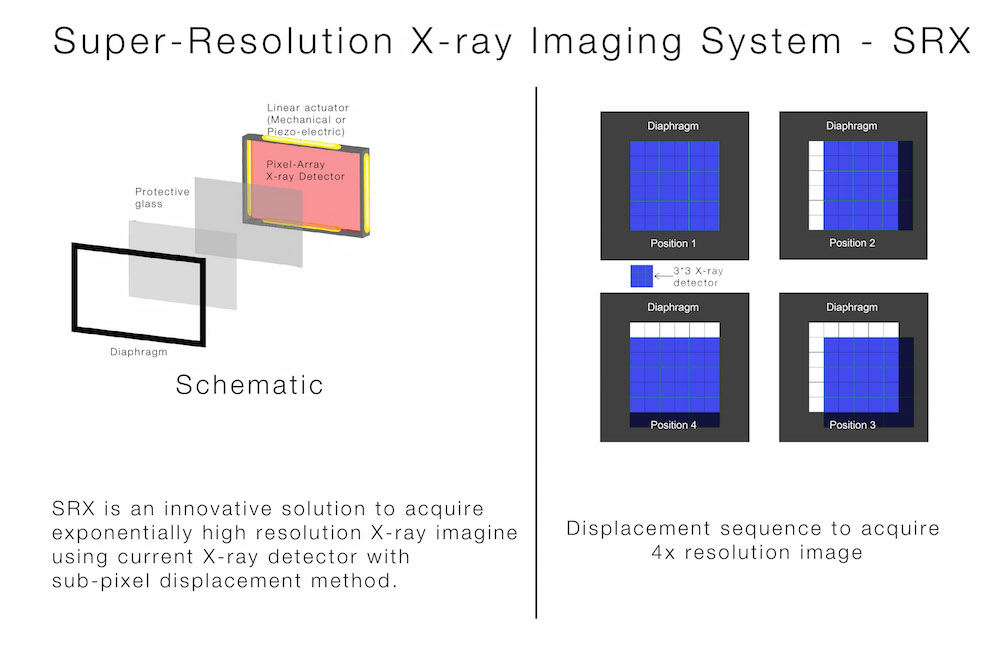 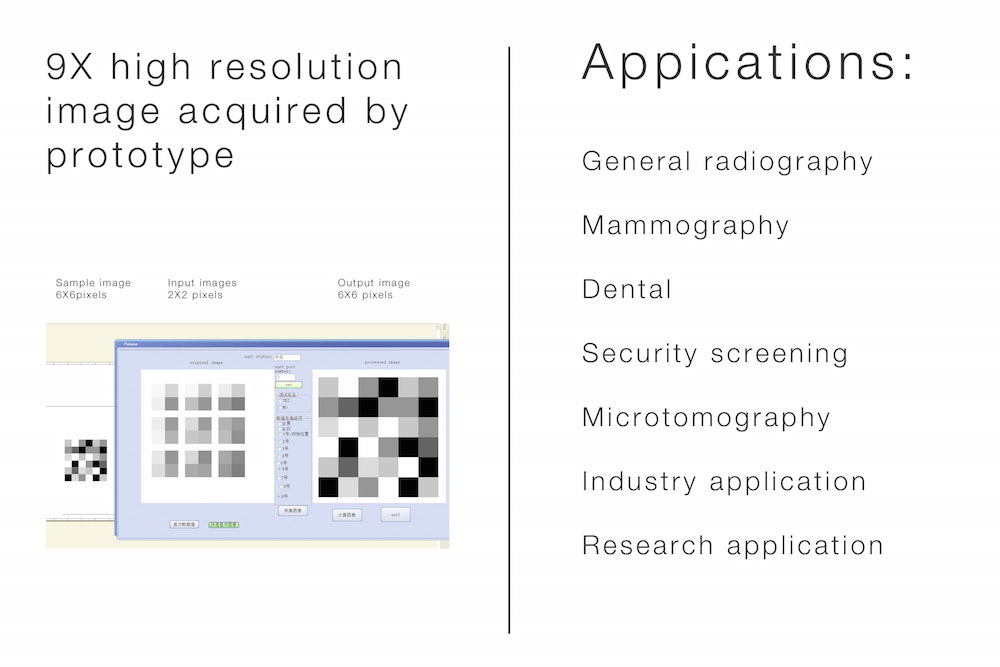 SRX is an X-ray imaging system designed to break through the limitation of the pixel pitch of its own X-ray detector. It consists of 1. A precision machined Tungsten diaphragm. 2. Pixel-array X-ray detector (PAD). 3. Two-dimensional micro displacement apparatus. The diaphragm is precisely carved to have an exactly same area as the X-ray sensitive area of the PAD. The PAD is mounted on the displacement apparatus, so it could be displaced by micrometers (1/N of the pixel pitch, N=2, 3, 4) in two dimensions, in relation to the diaphragm. Through a series of 2-D displacements, the PAD acquire one imagine after each displacement. These imagines containing slightly different spatial information are processed by a recomposing algorithm to generate an X-ray imagine with N2 pixels of the PAD.

SRX is designed to perform high resolution X-ray static imagining. It provides exponentially higher resolution at a reasonable cost. The fields of application are: General radiography. Mammography. Dental. Security screening. Microtomography. Industry application, and research application. Due to the multiple X-ray exposures, this system is not recommended to be used with live patients to get higher resolution imagine, it can still do one-time exposure and obtain imagine with pixels the PAD originally has. SRX is compatible with novel X-ray imaging techniques such as: Phase imaging and polycapillary.

SRX is highly feasible for manufacturing, as its crucial components such as the linear actuator are very mature and commercially available on the market right now. To achieve the similar 9X enhancement in resolution via traditional R&D method, the cost will be substantially higher.

The market size of X-ray detector is 2 billion USD in 2014. Driven by the factors such as growth of aging population, government and VC support, the market is expect to expand to 2.5 billion in 2019.

Unique features:
9 times higher resolution.
SRX is not contradicted to the development of PAD. When the PAD’s resolution gets higher, the system can still output 9 times higher resolution.
Theory and algorithm proven by prototype.
Compatible with novel X-ray imaging techniques such as: Phase imaging and polycapillary.
Works with any PAD.
Highly feasible for manufacturing.
Low cost compare to high resolution PAD.
Medical, industry, and research applications.