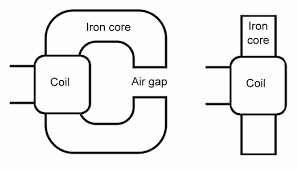 According to Faraday's laws; " As the rate of change of flux linkages increases, induced emf also increases".

In the invented Flat Generator, the rotary armature existing in any conventional type generator is converted into Flat Armature and is placed in the airgap between North Pole and South Pole of an electromagnet and if DC current in the field coils of the electromagnet is made to pass in a preset pulses; then e.m.f. is induced in the conductor/s of the flat armature of the flat generator, if the magnetic circuit is completed.

If the current passed in the field coils of the electromagnet/s is A.C., then an alternating current is induced inthe flat armature whose frequency is equal to the frequency of the A.C. passing through the field coils.

As the pulsating current in the electromagnet increases, the rate of change of flux linkages with the flat armature conductors also increases, and the induced e.m.f. also increases.

By increasing the number of armature conductors, number of poles and frequency of pulsating current in the electromagnet/s, the efficiency of the flat generator can be increased to such a level so that its output exceeds the input.