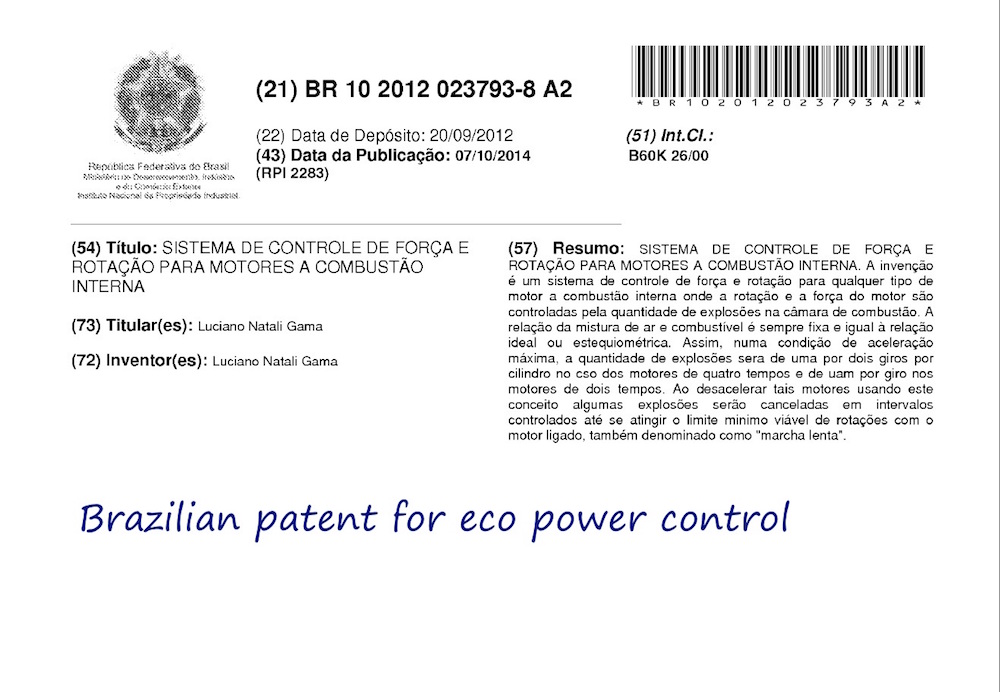 Internal combustion engines are a big source of pollution all around the world.. So when the efficiency of such engines is improved the environmental impact is diminished.

Nowadays, in an internal combustion gasoline engine, the throttle have a butterfly valve that directly regulates the amount of air entering the engine, aiming the maintenance of a relatively constant fuel / air ratio in the combustion chamber.

The accelerator pedal closes or open a such a valve. In a fuel injection engine, this valve is placed in the intake manifold inlet, and housed in the throttle body. In an engine having a carburetor, the carburetor is found.

The throttle valve can be controlled through a direct mechanical connection. For vehicles with electronic throttle control, the accelerator sends a signal to the engine control unit (ECU), which then indirectly controls the throttle valve position.

The text above discloses the internal combustion engine power control system as used today. This control is basically the same used in such engines since the year 1900 or even earlier, when these engines were invented... There are some issues in this system that were always considered "normal" but such issues are certainly non desirable. The presence of the butterfly valve causes the phenomena of a partial vacuum in the intake manifold. This vacuum does not allow the combustion chamber to be completely filled with the necessary amount of atmospheric air.

Today some manufacturers are using technologies aiming to achieve less fuel consumption, lower emissions, less weight and more power..Some use a start-stop system that automatically shuts down and restarts the internal combustion engine to reduce the amount of fuel that the engine burns when idle, thereby reducing fuel consumption and emissions. This solution is still being analyzed by the manufacturers in the search for problems that may appear in the long term using this technology.

Also, another system called "cylinder deactivation" is being used to reduce the fuel consumption and emissions of the engine during light-load operation. In typical light-load driving, it is used around 30 percent of an engine’s maximum power.

My proposition of power control system for internal combustion engines promises to be the best system until now... It eliminates the butterfly valve and the power of the engine will be controlled only by the number of explosions in the combustion chamber..In a regular two stroke engine there is theoretically one explosion by one turn of the crankshaft and in a four stroke one explosion every two turns. In my control system such number of explosions will occur only at full power, the maximum for that specific engine. In any other situation there will be less explosions..In an idle situation the number of explosions can be diminished to a minimum number needed to maintain the crankshaft spinning.