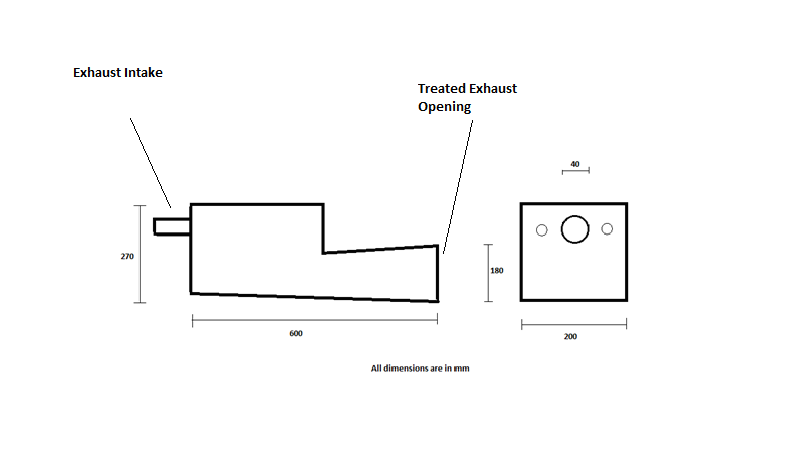 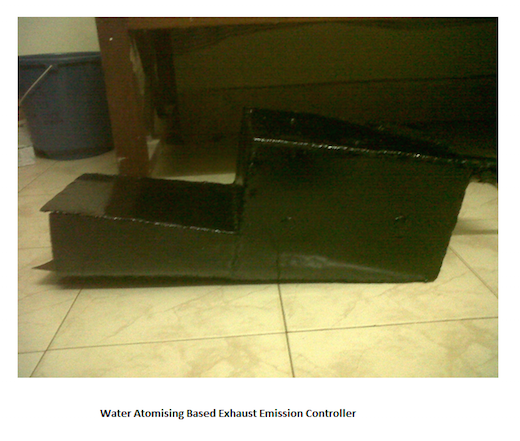 In the present day scenario, the exhaust emission problem has reached its alarming condition because of the number of vehicles increasing every year and its effect on the developing countries are troublesome.

The main objective is to minimize the emission gases i.e. UBHCs, CO, NOx, SOx and particulate matter by Water Atomising Effect over the exhaust of the engine.
In our emission control system we have created an artificial environment for exhaust system, in which water is made to react with oxides. These acidic oxides react with base to form salt and water as a result of neutralization reaction. Particulate matter mainly comprises of metallic abrasion, sulphates, silicate, ash particles, when these come in contact with water since it being a heavier medium settles. Water will be filled from an opening present at the rear of the set up and will be sprayed by the means of spray mechanism. Scrubbers will also be added to remove the particulate and/or gases from exhaust streams at the end.

Sprayers are installed in rectangular chamber in which the gas stream is contacted with liquid droplets generated by spray nozzles. A common form of a spray tower, in which the gas flows upward through a bank or successive banks of spray nozzles. Similar arrangements are sometimes used in spray chambers with horizontal gas flow. Such devices have very low gas pressure drops, and all but a small part of the contacting power is derived from the liquid stream.Physical absorption depends on properties of the gas stream and liquid solvent, such as density and viscosity, as well as specific characteristics of the pollutant(s) in the gas and the liquid stream (e.g., diffusivity,equilibrium solubility).These properties are temperature dependent, and lower temperatures generally favour absorption of gases by the solvent.

Material recommended is Austenitic Stainless Steel [Type304], and the material used for fabrication and modeling is Galvanized Iron.

The reaction chamber is designed in such a way so that the exhaust gas entering the chamber is restricted to increase the reaction time between the gas and the sprayed water.

Water is sprayed and not poured basically for two reasons :
1. To minimize back pressure
2. To allow interaction of more and more oxide molecules with that of water.

Treated exhaust emissions are found to be well below the permissible limits. And the entire set-up is very economical to get implemented anywhere.