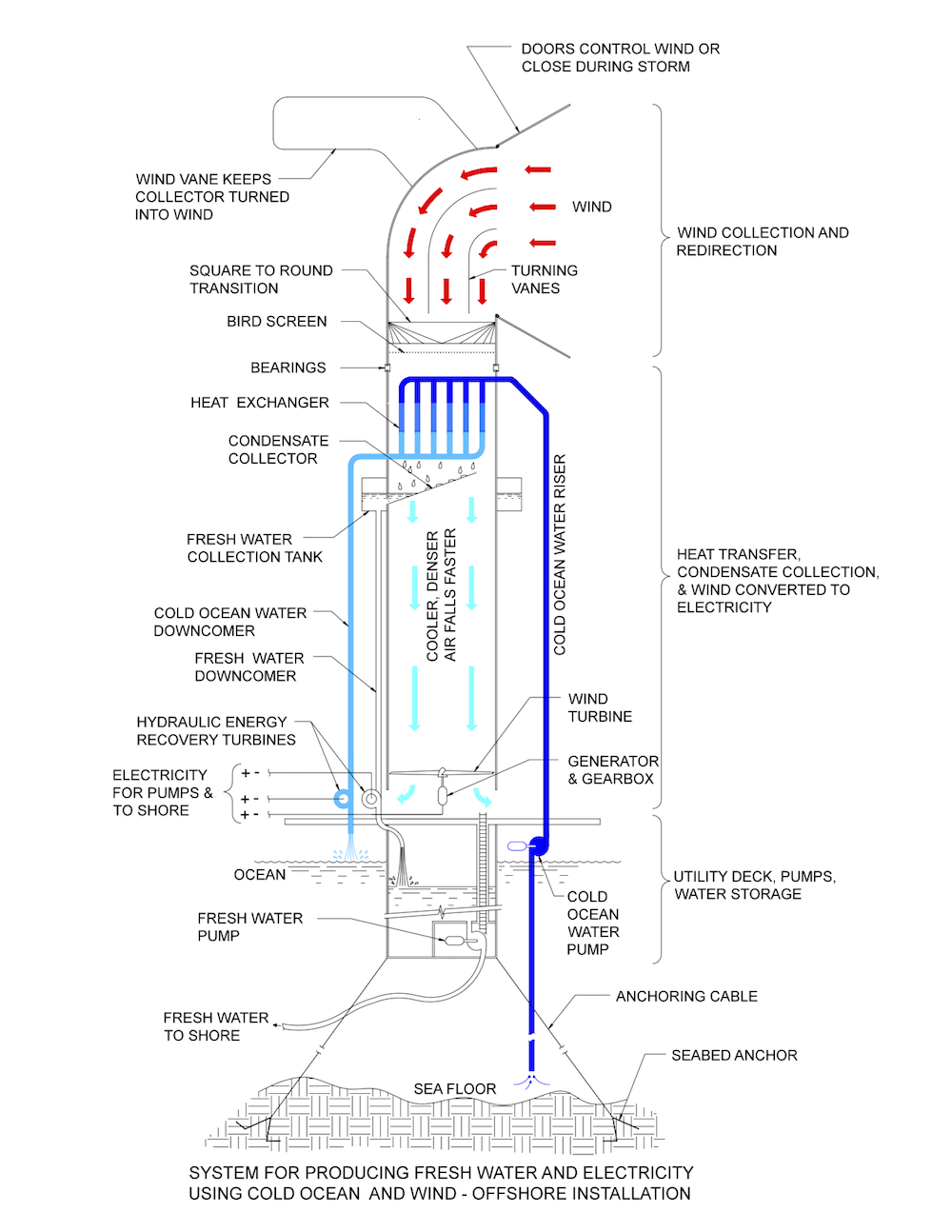 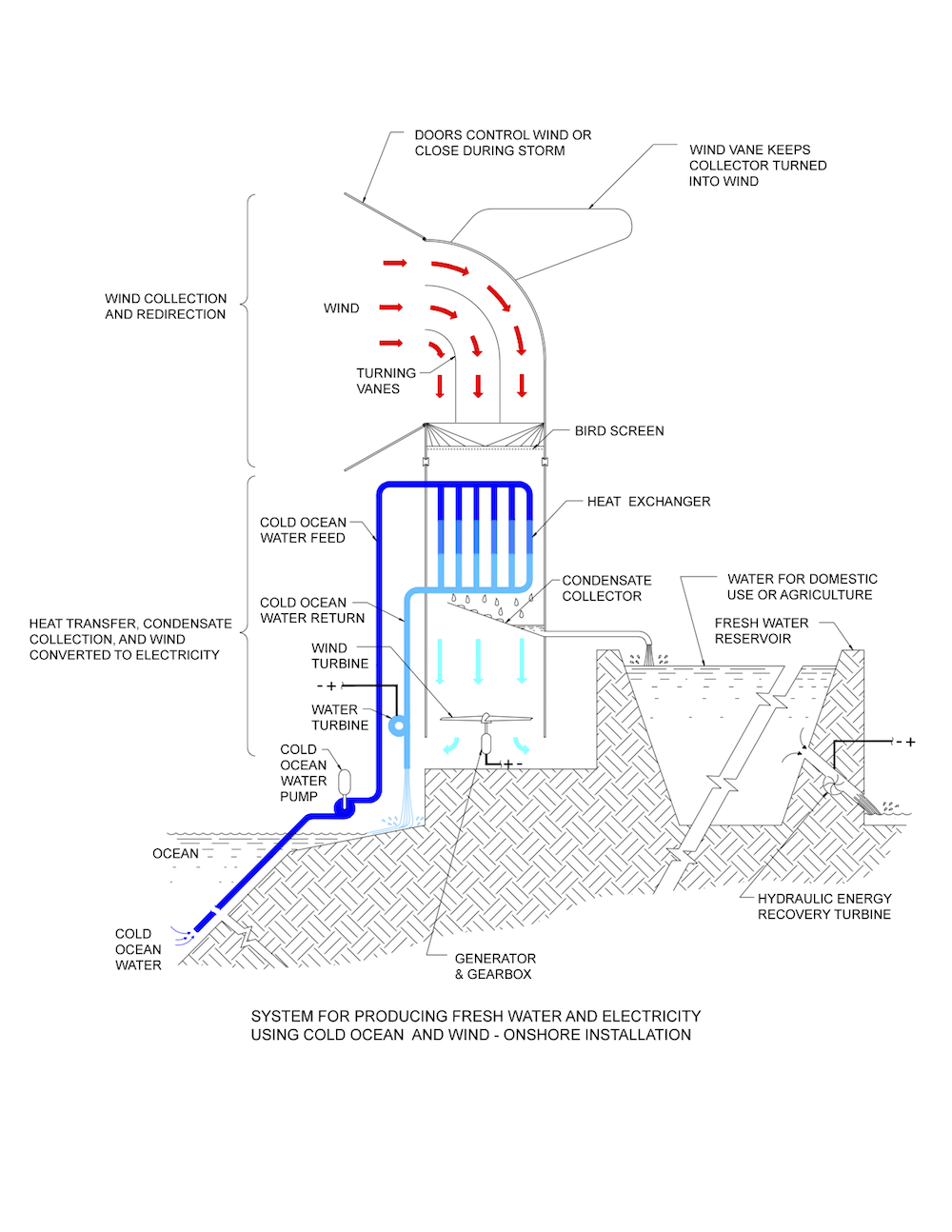 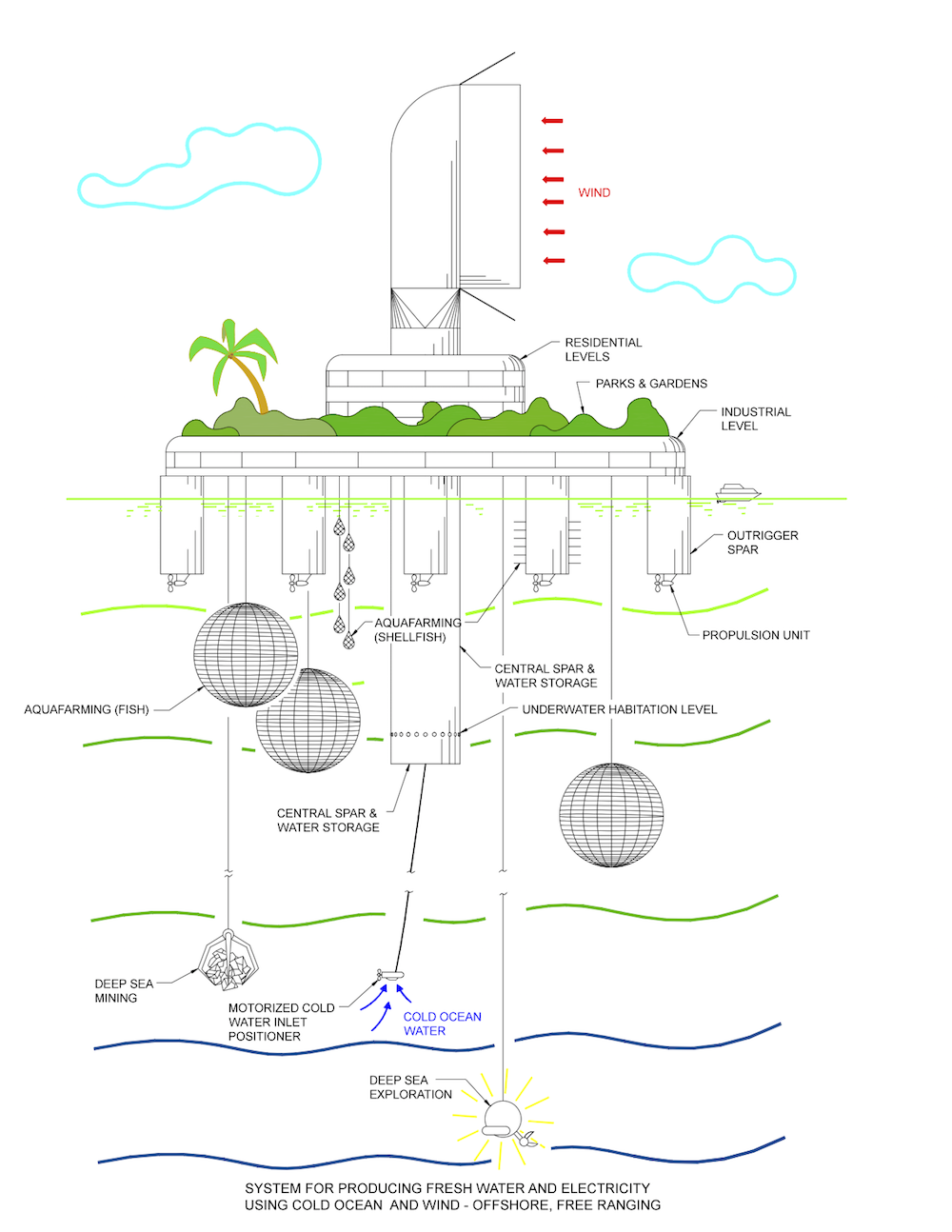 With all the talk of peak oil, it is hard to believe that something as important as peak water may have already come and gone with no equivalent hue and cry. Eighteen countries; including the big-three grain producers China, India, and the U.S.; are now over-pumping their aquifers. For 20 years Saudi Arabia was self-sufficient in growing wheat. They have nearly exhausted their aquifer and will quit growing wheat in 2016. Recent droughts in California and Texas seem bad but there is evidence that a major portion of the Southwest U.S. underwent a 10-year drought with hardly a drop of rain several hundred years ago. Inexpensive desalination is needed.

Cold ocean water in combination with warm, humid tropical and subtropical air provide the opportunity to meet water and power needs for the future.

For just the cost of equipment and maintenance this system provides both water and electricity. It is basically a tower mounted on a spar-type, offshore platform. Deep, cold ocean water is pumped into a gas-to-liquid heat exchanger in the top of the tower. Wind is concentrated and re-directed into the heat exchanger. The air becomes cooler and the humidity condenses out onto the surface of the heat exchanger and is collected. Because cool air is denser it accelerates toward the bottom of the tower; essentially a reverse stack effect. A wind turbine at the bottom of the tower harvests the wind energy before it leaves through openings around the base of the tower. The collected water and generated electricity is sent to shore.

Another version is built on the shoreline and uses an onshore reservoir to store the water. This stored water produces electricity that makes up for slumps in production from the wind turbine.

Another version is free-floating with its own propulsion. With the ability to produce electricity and water, it can become a base for mining, aquafarming, recycling ocean plastic, or scientific studies.

The spar provides stability for the tower even in high winds and heavy seas. Although it resembles an offshore drilling or production rig, it is much more simple and less expensive.

A unit 120 feet in diameter, 300 feet tall (spar below the surface counterbalances and structurally stabilizes the tower) could produce 20MW on average and between two and five million gallons of water per day.

Advantages:
• Bird deaths eliminated.
• No chemicals to leak into the environment.
• Produces power even when the wind is still due to the reverse stack effect.
• No azimuth yaw mechanisms needed to keep wind turbine aligned.
• Being at sea eliminates land purchase or rental.
• Nutrient-dense deep ocean water can be used for aquaculture.
• There is plenty of “fuel” since 90% of the ocean’s volume is between 32ºF and 37ºF and 40% of the world is tropical or subtropical.

At the very least, it can bridge the gap for humanity’s needs for clean power and fresh water until nuclear fusion or some other technological breakthrough can carry the load.