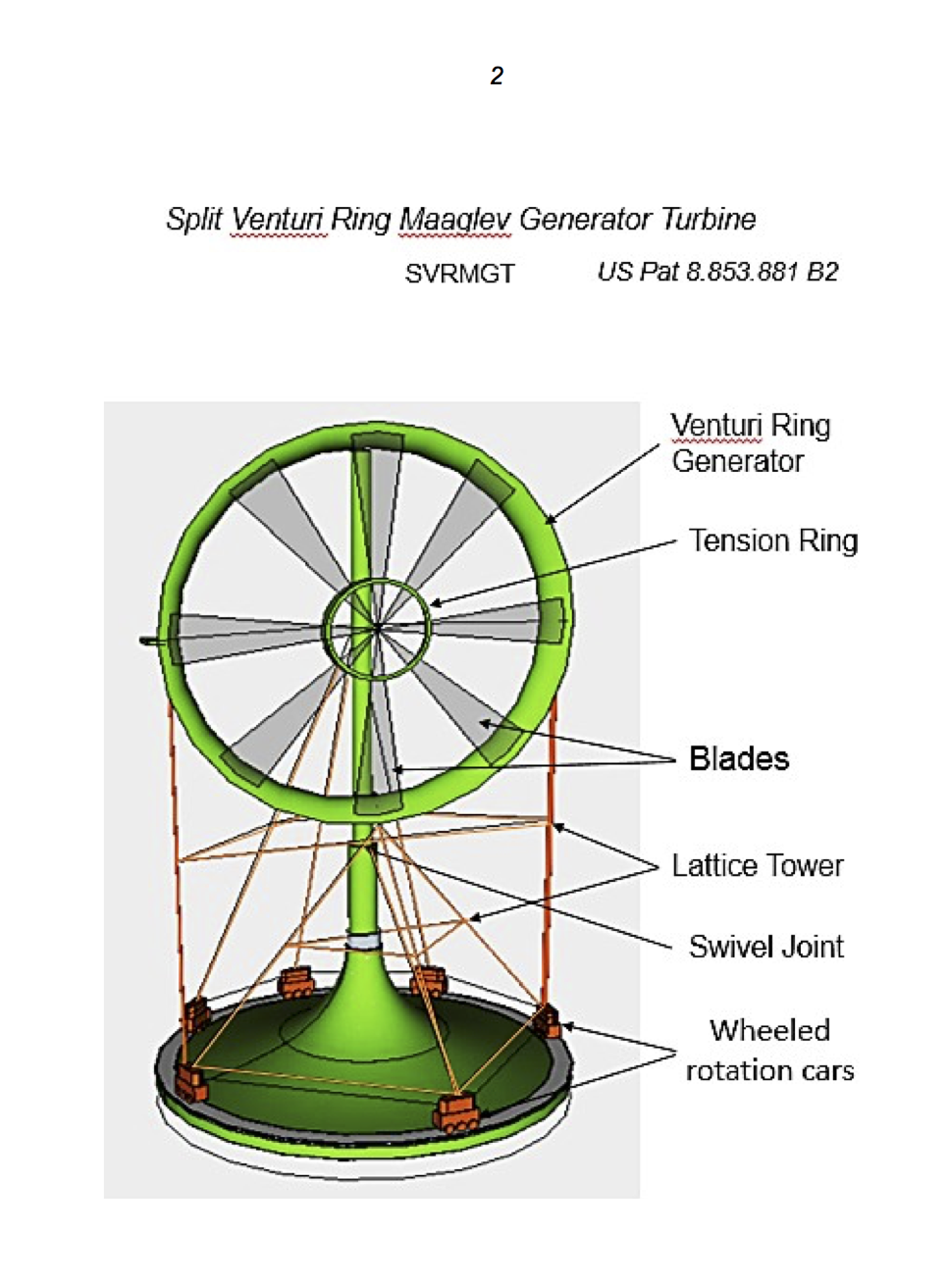 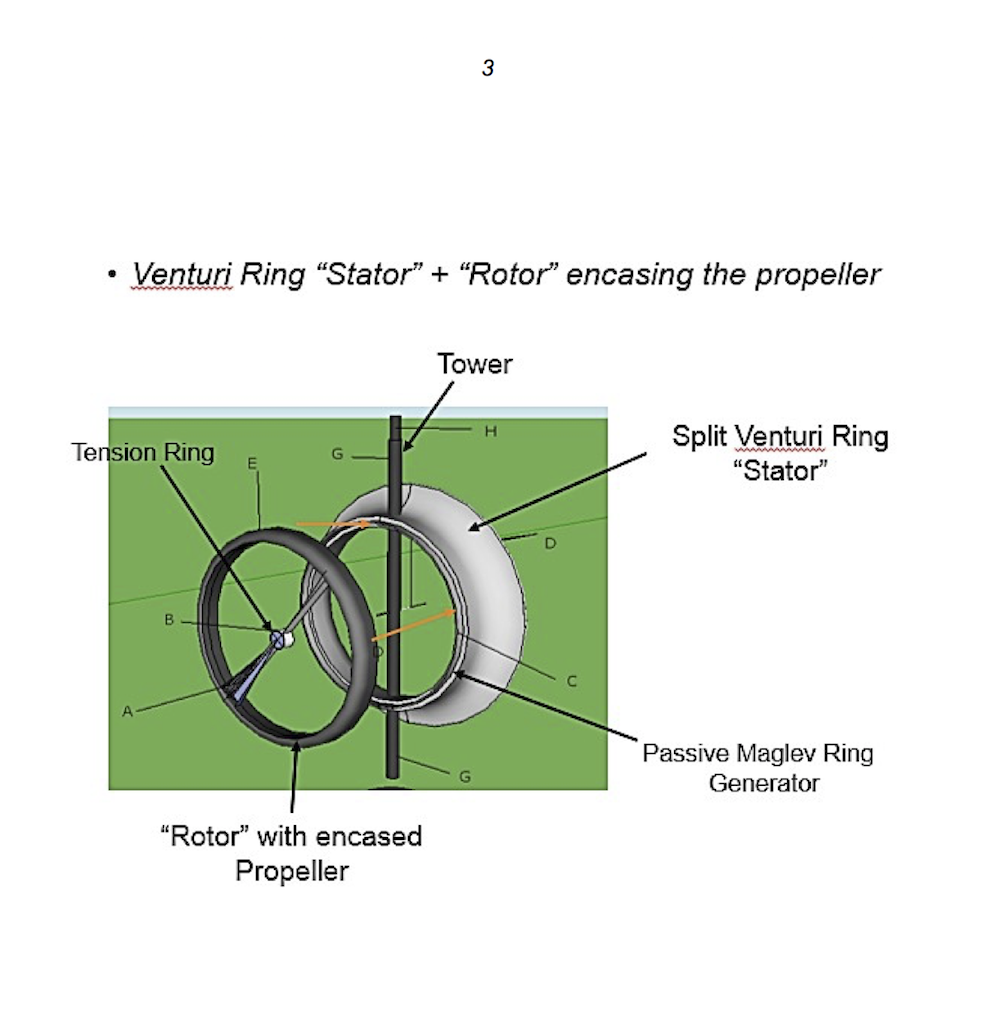 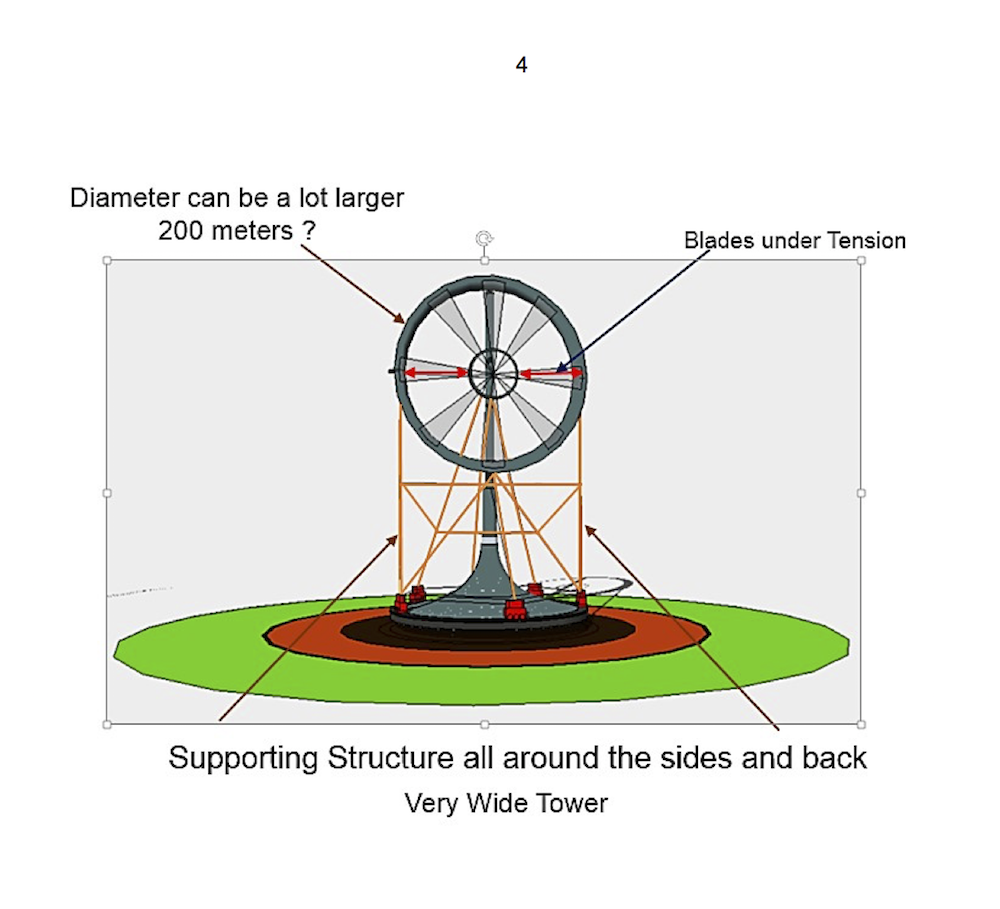 ABSTRACT
Recently, wind turbines have been growing in size and complexity and blades have grown to be larger than 80 ft in length and weigh 40 tons, submitting them to stronger loads. Now they are being deployed offshore, looking for steadier and stronger winds.

The present invention describes a turbine with a propeller encased in a hydro/aero-dynamically improved profile, a "venturi ring" that accelerates the fluid through it and boosts power output, and which isolates the propeller from most of the external loads. The propeller’s blades are placed under tension between the ring’s rim and a central tension ring, and spanning through to the other blade to the other side of the ring.

The venturi ring is a shroud with a narrow throat upstream and a wider, expanding throat downstream which creates a low pressure zone behind the system that increases circulation of the fluid through the propeller increasing the power output. The "maglev ring generator-bearing" embedded around the perimeter of the venturi ring shroud consists of two rings with identical diameters, the stator, which contains the switchable coils embedded around the rim of the venturi shroud, and the rotor ring including an outer rim and a plurality of propeller blades within the outer rim. Permanent magnets are placed in two configurations of "Halbach arrays" on the "rotor," which move over and under the "stator," which contains a configuration of copper coils around the perimeter of the venturi shroud.

• The Halbach array, invented by Klaus Halbach is a specific order of magnets, which double the magnetic field on one side while cancelling it on the other.

This double configuration doubles the original Halbach array arrangement and doubles the force of the magnetic field on the coils. The permanent magnets may cover the whole perimeter of the rotor or just sections of the arc where the tips of the blades are attached. The power output will change accordingly.

In other words, the combination of open and closed copper coils produce a levitating magnetic field and an electric current simultaneously, but may be adjusted on command. Thus, the maglev ring generator-bearing with variable input is provided.

These SVRMGTs features allows a very light weight propeller, negates the shaft, the gearbox and the nacelle, which also makes the whole system a lot lighter and simpler, because the blades under tension are subjected to smaller and different loads.

The SVRMGT is especially suited for Offshore Wind Turbines on floating platforms.