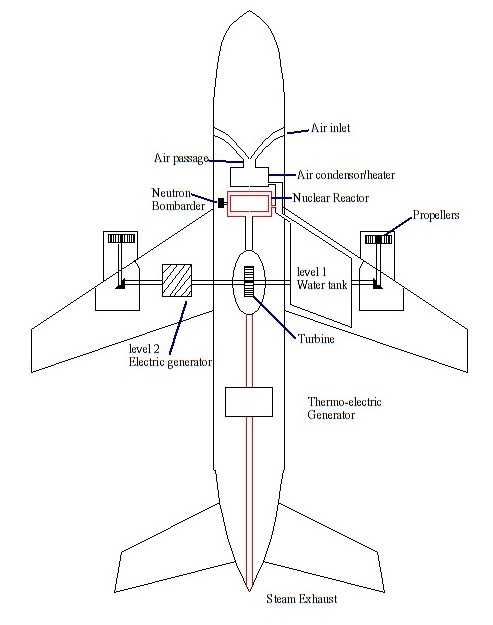 The nuclear fission is performed on a low weight radioactive material like Iodine. The heat so released is used to convert water into steam, which in turn drives the turbine. the water is stored initially in water tank which is at level 1 in the plane, and later is generated by heating air to turn water vapor to water. the fission is controlled according to power demand. the turbine converts steam pressure energy to mechanical energy. this is directed towards the propellers by means of gears and transmission devices. there is an electric generator placed in level 2 which extracts electricity from mechanical rotations of turbine shaft.

The steam from the turbine is directed out and the cycle repeats. there is also a thermoelectric generator which is used to extract electricity from output of steam.

The nuclear reactor is thermally insulated on 5 sides except for one side which is connected to air heater. the fission is controlled and safety devices like leak sensor, temperature sensor is placed at various places and is connected to a central control system. the heat from fission is used for water generation as well as to generates steam which drives the turbine. the generators extract electricity from mechanical motion of turbine shaft and thermoelectric generators use heat of output steam to generate electricity which is used to drive electrical devices and actuators.