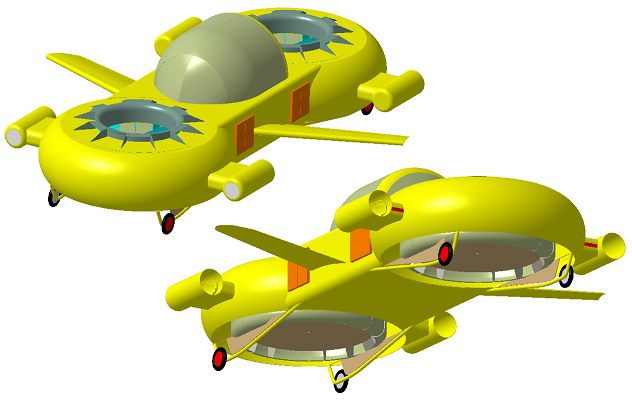 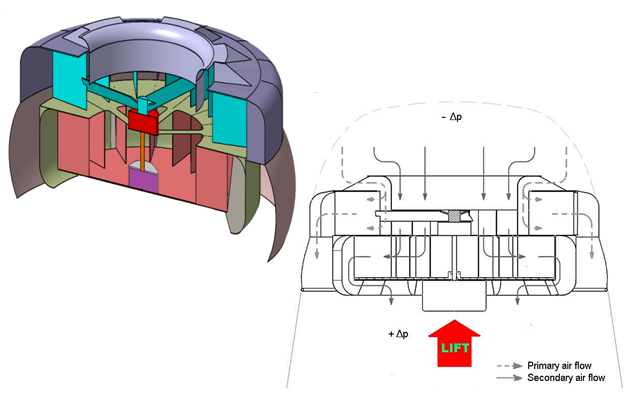 Problem to be solved
We will rapidly approach a point where the terrestrial traffic simply stands still, and that will limit our personal movement. So the vertical flight made by Vertical Takeoff and Landing – VTOL aircarft becomes a logic and immediate solution. On the other hand, the single actual means for vertical flight is represented by helicopter. This expensive aerial vehicle is very risky to be used in urban environment because its exposed external rotors for which any contact with other external object leads to a disaster.

Potential benefits
As opposed to the mechanically complicated cyclic swash-plate and mechanically coupled tail rotor found in a conventional helicopter, the presented aircraft implements a simple, safe and low weight construction. This system uses fewer and simpler parts than a conventional helicopter, which should ultimately make it less expensive to manufacture and maintain.

How it works
Vertoflyer uses two advanced powerplants arranged in “tandem”. Each advanced powerplant mainly employs two centrifugal fans which are superposed, creating a unique combination of lifting surfaces and a double flow air distribution. Between the two powerplants is located the cabin which can accommodate at least two person. The cabin can support two fixing wings located in the middle area. Under each powerplant are mounted two flaps, serving to stabilize the vehicle during vertical flight. Tangentially to each powerplant are located two nozzles which diverge the air flow of the superior compressor rearwards and can create a horizontal thrust. Each nozzle is controlled by a throttle acted by an actuator.

In the pure electric variant of Vertoflyer, the electric motors are supplied with electricity by a number of modular batteries which are mounted in the lateral walls of the cabin. This system, with modular batteries, avoids transporting a futile mass. On the other hand, if the batteries are discharged, they can be easy replaced (being modular) and Vertoflyer is very quickly prepared for the next fly.

Vertoflyer can be launched and landed almost anywhere. The lift is ensured by the two powerplants. After vertical lift the throttles of the nozzles are gradually open and an horizontal thrust is created. If the horizontal speed increases sufficiently, a big part of the lift is created by the fixed wing and a small part by the two vertical powerplants.

Manufacturability
There aren’t new technologies or precious materials necessary to build Vertoflyer. This can be manufactured easily with the current technology used in aircraft manufacturing and with existent suppliers.