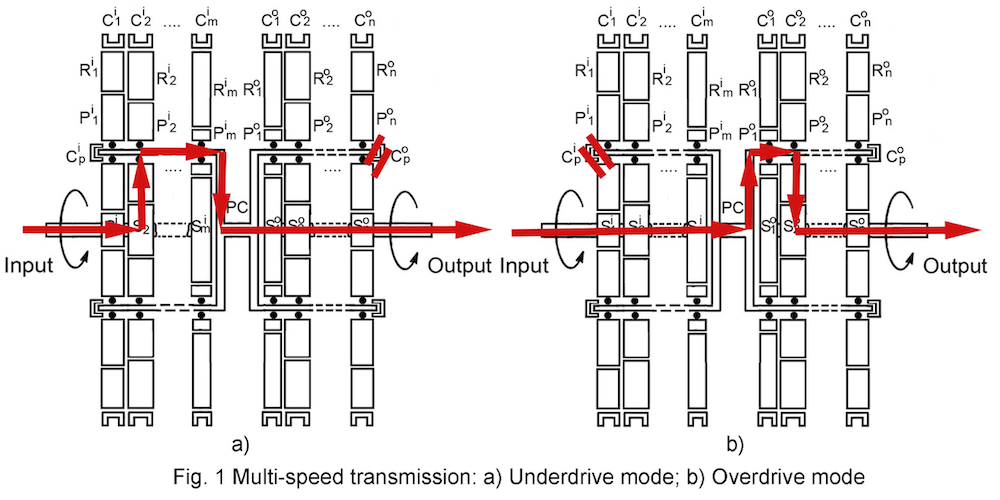 A concept of novel modular multispeed transmissions is proposed for electric vehicles, with the total number of underdrive and overdrive speeds dictated by the application needs.

The first variation includes two separate gear trains, as shown in Fig. 1: one for underdrive, and one for overdrive speed ratios. The number of ratios in each gear train is independent and defined by the number of modules based on planetary gear sets.

All planets of the underdrive gear train are installed on a common planet carrier PC, each axis of the latter carrying a group of m planets. Each planet is coupled with corresponding ring and sun gears, the latter being rigidly fastened to a common input shaft. The gear train includes m ring gears of different pitch diameters, controlled via friction clutches. The input rotation is transmitted from the input shaft to the suns, and then to one of the planets, thereby creating m underdrive modes.

Friction clutches between the planet-carrier and one of the planets in both geartrains switch the transmission between the two modes. Simultaneous engagement of both gear trains creates additional gear ratios, with a total of k gear shifts, namely,

The second variation has only one gear train working both in underdrive and overdrive modes. Each module provides a pair of speed ratios (underdrive and overdrive), thus reducing the size of the transmission, but the number of speeds in both modes is equal. The gear shifting is controlled by the ring gear clutches, and the power flow is redirected by the two dual-clutches, one at the input, the second at the output of the transmission, as per Fig. 2:

Transmission prototypes are shown in Fig. 3.

Novelty
Currently, few attempts so far use two- or three-speed transmissions (mostly redesigned from conventional automatic transmissions for gasoline cars) for medium- and heavy-duty electric trucks, with no research and design of more than three speed ratios. However, depending on the number of required gear shifts, an appropriate number of modules can be added at the design stage, to ensure suitable driveability, smooth, swift-shift capability, thus reducing power consumption and improving vehicle performance.

Manufacturability
Transmissions consist of simple planetary gear modules and can be readily designed for any type of electric vehicle with any required number of speed ratios. Transmissions can be machined on the same production lines with minimum adjustments and changes.