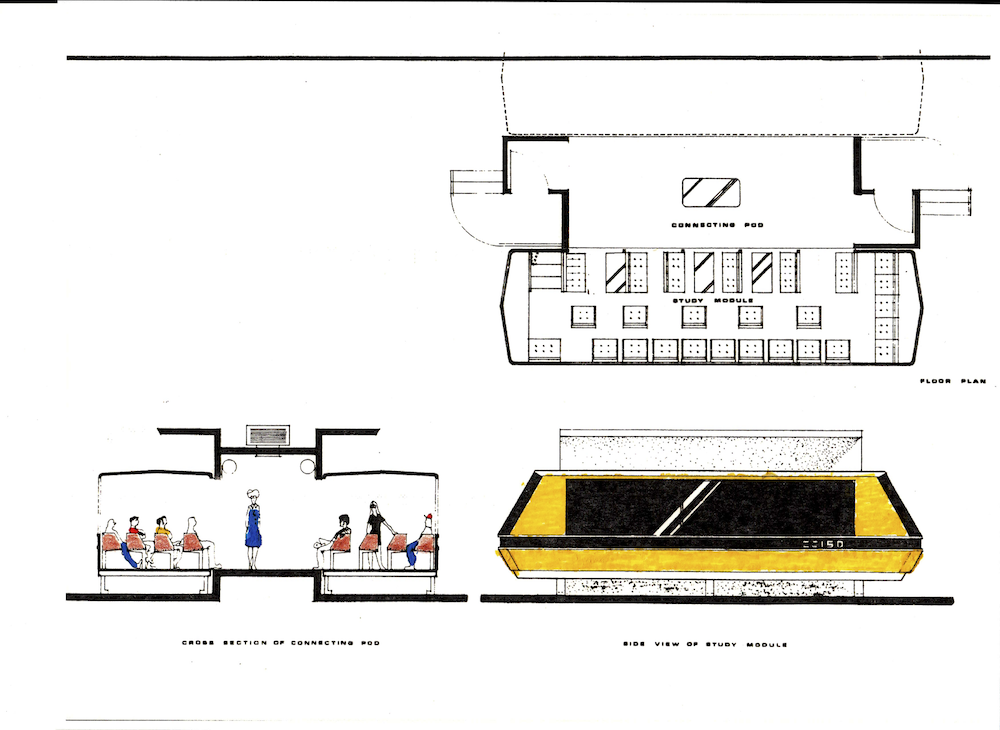 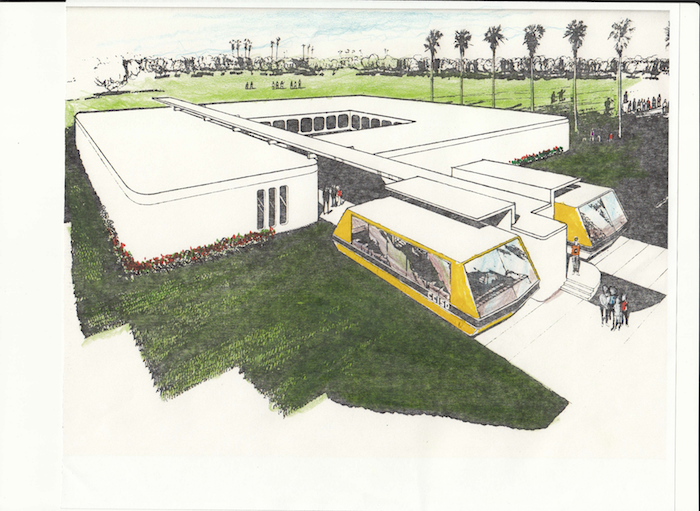 THE M.L.M. (MOBILE LEARNING MODULE)
A NEW SPACE FOR EDUCATION

Education, both general and explicit, is generally accepted as the essential ingredient of social and economic success of nations and institutions. This happens, not by chance, but by unrelenting effort by educators and those who support this proposition of the future.

The concept of the Mobile Learning Module is formed to provide another possibility in the creative management of time and functions in the educational environment. In addition to the utilization of M.L.M. in the school district’s transportation strategies for student movement, the modules also provide usable instruction space at the individual school sites. This is achieved by specially designed connecting pods where the modules are attached to the pods. This arrangement forms air conditioned seating areas facing a central teaching station. Educational Broadband Service (EBS) connections would be provided with both the school building and the district’s remote learning studio.

The M.L.M. model has the potential use as a stand-alone facility in sparsely populated regions as well as urban neighborhoods for adult skills retraining with remote learning arrangements. The pod in this configuration could be either a permanent structure with connected utilities, or a mobile unit capable of relocation as needs arise.

The primary benefit of these learning modules is the utilization of enclosed, furnished, and conditioned space that sits idle except for transporting students. Another important benefit is fuel cost reduction and the resulting reduction of carbon dioxide atmospheric loading. This cost savings is a variable accomplished mainly through route planning. The self-propelled module is stationed at the school site during the school week instead of returning each day to a central transportation maintenance facility. Eventually, these vehicles will be driven by hybrid power plants that can be recharged at the school site.

The M.L.M. arrangement depicted in this submittal is configured to be transported by separate tractor unit that moves away from the module while connected to the “Pod”. This is a practical first phase for developing the concept. It also introduces the possibility of an expanded line of modules. The tractor becomes a more versatile vehicle that has multiple uses during the educational use of the module. In smaller municipalities with limited budgets, this tractor may be used by other departments for “clean task”.

The critical elements of the concept are details of mechanically activated openings in both the pod and the modules. The pod openings are achieved by electrically driven roll-up doors available on the current competitive market. The opening on the modules may vary in type based on the size of the module. Two types of closures are seen as technically feasible, the upward folding panel wall and the horizontally rolling panels.

This specialized transport/learning module can be developed through engineering protocols to produce a number of test sites. Ideally, this would occur near one of the existing school bus manufacturing plants.

The enhancement of the design would occur through usage. Eventual marketing would be driven through the established manufacturer’s sources and educational publications.