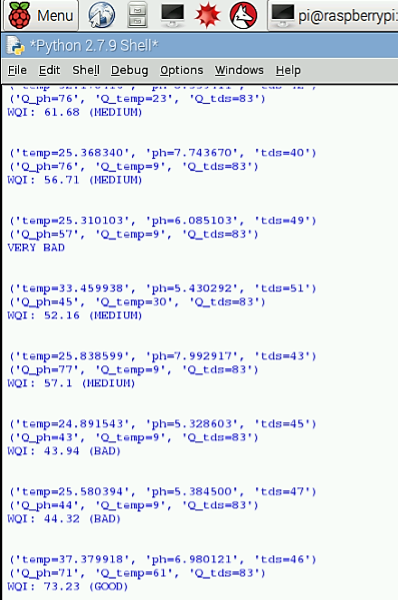 This system tries to account for various parameters of water like pH, turbidity, TDS (total dissolved solids), BOD (Biological Oxygen Demand) to create a water quality index for the lakes. Lakes, as we know, form an important part in our ecosystem. Last year we found several lakes around Bangalore in India frothing up due to the excessive drainage of industrial effluents and other factors. Thus our project is an inspiration to save other lakes from extinction.

First, we have collected data from various lakes and performed regression analysis to find the best fit for various parameters. Based on the behaviour of the Q value with the factors weights were chosen and they were normalised into finding a score out of 100. This resulted in finding the water quality of the lake water. The integrity of an ecosystem is typically assessed through its ability to provide goods and services on a continuous basis. Together with the air we breathe, the provision of clean water is arguably the most fundamental service provided by ecosystems. Yet, human activities have fundamentally altered inland water ecosystems and their catchments. As a consequence, species dependant on inland waters are more likely to go extinct, and future extinction rates of freshwater animals could be up to 5 times higher than for terrestrial animals.

In an effort to develop a system to compare water quality in various parts of the country, over 100 water quality experts were called upon to help create a standard Water Quality Index (WQI). The index is basically a mathematical means of calculating a single value from multiple test results (9 parameters).

• Dissolved Oxygen
The dissolved oxygen test measures the amount of life-sustaining oxygen dissolved in the water. This is the oxygen that is available to fish, invertebrates, and all other animals living in the water.

• Faecal Coliform -- It is a form of bacteria found in human and animal waste.

• Nitrates -- Nitrates are a measure of the oxidized form of nitrogen and are an essential macronutrient in aquatic environments.

• pH
The pH level is a measure of the acid content of the water. Most forms of aquatic life tend to be very sensitive to pH.

• Temperature Change
The water temperature of a river is very important, as many of the physical, biological, and chemical characteristics of a river are directly affected by temperature.

• Total Dissolved Solids (TDS)
This is a measure of the solid materials dissolved in the lake water.

• Total Phosphate
Phosphates are chemical compounds made from the elements phosphorous and oxygen.

• Turbidity
Turbidity is a measure of the dispersion of light in a column of water due to suspended matter.
Raspberry Pi was used on building the prototype and tested out with various sensors interfaced with it and study the interdependability of such parameters and predict the quality of lakes with the current trend.