Battery For Calling And Apps 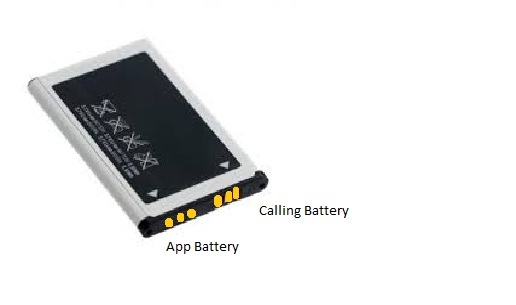 These days cell/smart phones are used for a variety of purposes. The basic functionality of any phone is to make calls and text (SMS). Due to various applications usage, battery drains quickly and we need to find source to charge quickly. I have seen many people struggling to find a power plug at the airport to charge the phone. Else we have to buy power bank, it is a expensive, bulky and inconvenient to carry. If battery is drained, we usually don't remember close relatives' phone number for emergency or any urgent message. This solution talks about battery for calling and applications within existing space allocated to phone battery.

Within given space, we can either use two separate batteries or create battery internal structure such that it gets divided into two compartments within single encapsulation.

We can term as first compartment as "calling battery" and another as "App Battery." We don't have to maintain two batteries, we can use or buy new battery as usual having two internal compartments.

We can make two independent power circuit, it may not take much space. Even this logic can be built using software logic if hardware implementation becomes challenging.

Advantages:
1. Important telephonic meetings can still be attended even if the application battery is drained.
2. Old/ aged people or in case medical urgency, calling battery can help to access to emergency number or making calls
3.Young people can use phones economically without the need of buying power bank and carry it all the way.
4. We can full functionality without the fear of battery drain. We can still make calls -- basic functionality is reliably ensured.

Disadvantages: Need hardware changes, initially dealers or channel has to manage both batteries, battery cost may go up.