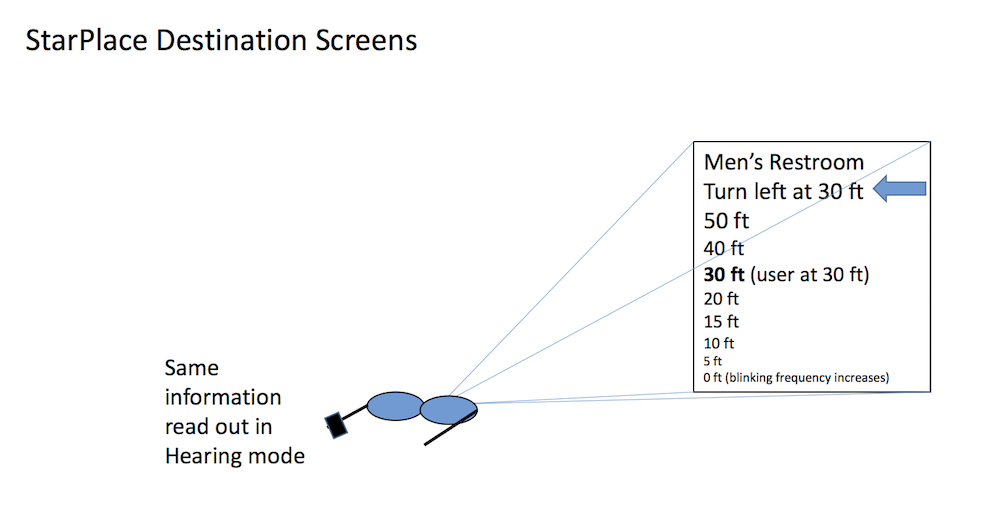 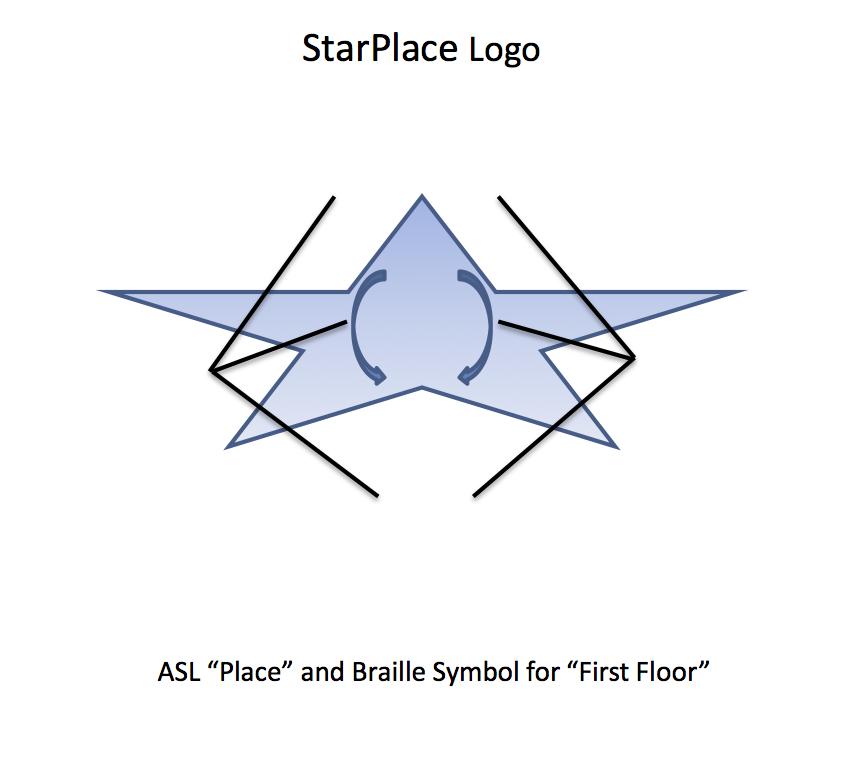 SYSTEM OPERATION
For both modes, a Pointer gives directions via earpiece and on screen, triangulating the orientation of the user referenced to North and basing a change in direction via AG or mobile device accelerometers already incorporated. Access to specific Destination is via taps on the AG or touch on computing device to scroll through Destinations; Each Destination would enunciate itself, for example, “Men’s Restroom – twenty feet, fifteen feet, etc,” a voice countdown for Hearing mode and visual countdown for Visual mode. Either mode could be enabled to automatically enunciate all Destinations, or groups such as restrooms, entrances, emergency exits, etc, or to exclude some.

System Location set up includes input of unique hall and room numbers, identification of the North entrance, and maintenance of KOZs. For construction, the System Location inputs GPS coordinates. For wet floors, a WiFi-transmitter mounted on a Wet floor sign broadcasts a simple verbal message, “Caution – Wet Floor” and the AG or mobile device blinks the display over a narrow area. This system would not give specific locations of individuals for security and logistics considerations, though enabling such data could be a system preference.

A universal convention for Locations adaptation for all Locations everywhere, especially major Destinations, such as lobbies, entrances, restrooms and KOZs. Many large public buildings would upload internal maps to allow users to plan a visit to these Locations in advance; these would be accessed on the web or via QR code outside the building on the walkways leading up to each building. For Hearing mode, the system guides a user to a QR code. The AG or mobile device arranges to display the result and can read off Destinations. For security, selected specific Destinations would not be available.

User may select either active mode as above or passive, where an RFID interrogator on the mobile device reads RFID tags and sends voice direction to the earpiece or enables map displays.

A universal visual logo should be designed for all Locations that use this system and a unique tone sequence should sound when the user nears a Location; the display should also flash the logo on the screen.

IMPLEMENTATION
This system will be implemented at NASA Johnson Space Center (JSC) for its central campus.