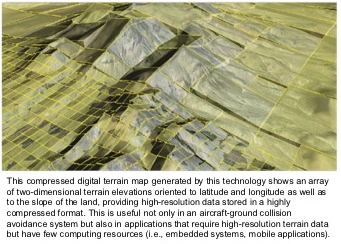 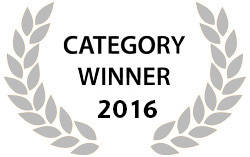 Capable of encoding massive amounts of data into a package more than 1,000 times smaller than with standard compression, this technology is poised to revolutionize the use of digital terrain maps (DTMs) in restricted environments (e.g., tablets, smart phones, embedded systems).

To fully understand the significance of this technology’s dramatic capabilities, consider the application for which it was originally developed: preventing aircraft collisions with the ground. Developed in collaboration with the U.S. Air Force, this innovation was created to locally decode and render DTMs for high-performance military airplanes needing automatic course correction in response to unexpected/dynamic events.

The technology’s extraordinary capabilities enable an aircraft-based system to:
-- Provide access to DTMs with significantly higher fidelity than ever before
-- Store a greater number of DTMs, covering an entire continent or even the entire world
-- Decompress those DTMs more rapidly than was previously possible, providing real-time rendering of a continuously updated local map

Standard compression methods provide only a 4:1 compression ratio—that is, the original file size is reduced only by one-fourth. In an aircraft—or in other computing-constrained environments—this shortcoming in compression capability limits the number of DTMs that can be stored locally at any one time. In the case of an airplane, technicians must swap out the DTMs in between flights, which introduces the opportunity for human error and requires extensive manual quality-control work.

NASA’s technology can compress extensive DTMs at the highly efficient ratio of 5,000:1. Compared to the standard 4:1 ratio, this compression ratio is enormously more effective. For example, a 22-megabyte (22 MB) DTM that previously could be compressed only down to 5.5 MB can now be shrunk to a miniscule 4.4 kilobytes (4.4 KB).

Although aviation is the original target for this valuable technology, NASA’s software has a wide range of applications. It is useful in any computing-constrained, real-time, embedded environment where both significant compression and very fast local decompression are needed. This includes situations where line-of-sight needs to be rapidly computed, where continual surfaces need to be analyzed, and/or where terrain routes need to be analyzed and planned.

As a single example, the software is forming the basis for an intelligent cruise control that would achieve better fuel economy in cars.