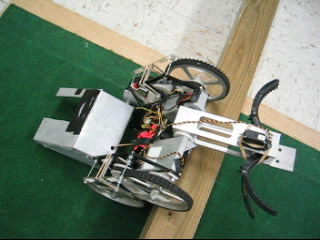 The servo motors runs the wheels of the robot and the gyroscope. A crane is attached using bolts to part shaped like a cabin the body of the robot. The crane is placed above the gyros. This wall climbing robot can be controlled by a remote control.

When the robot is supplied with power it runs forward its direction and the movement of the crane is controlled by the remote control.

Since the robot needs to climb wall of great heights it should be made of light weighted material to climb easily. So, the power consumed will be less and the batteries used may be smaller which may also reduce the weight. Materials like steel, carbon fibres can be used to make the body and parts of the robot. It can be made by CNC machining or by sheet cutting process. But CNC can be used for quick machining.

This robot can be employed for assisting the work of a labour working at dams bridges or in the construction of high storeyed building. This can also be used to remove or fix bulbs. It can help by picking up gadgets. It can be used to clean windows of buildings. It may be even be used to paint buildings.