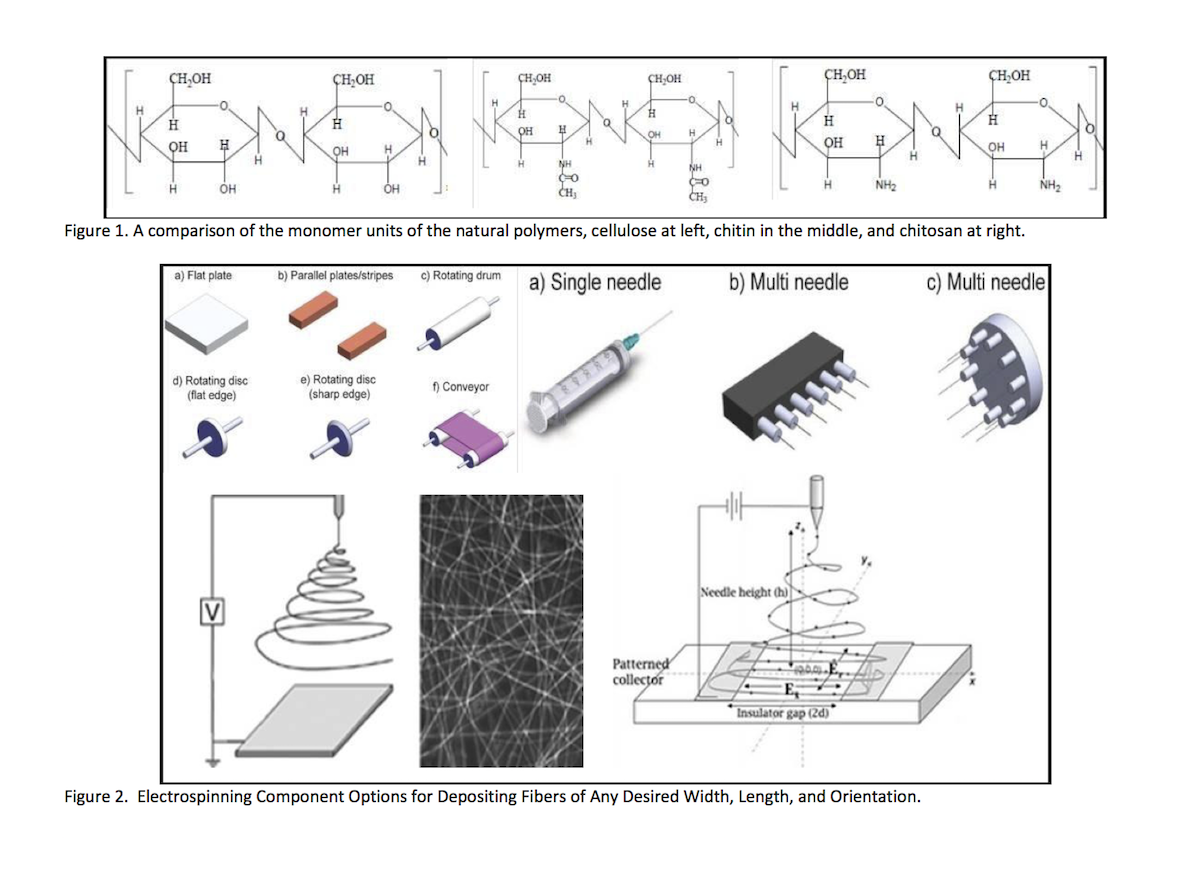 Chitin is second only to cellulose as the most abundant naturally occurring polymer on Earth, a polysaccharide produced by living organisms, including crustaceans, insects, and, importantly, fungi. Chitin is a homopolymer of acetyl-glucosamine. Chitosan is a “de-acetylated” derivative of chitin, and is a very versatile a biopolymer, and has been found to be useful in many applications. The molecular structure of these polymers are very similar. The only difference is that the 2-hydroxy group of the cellulose has been replaced with an acetamide or amino group, in chitin, or chitosan, respectively.

There has been considerable development in production and application of chitin and chitosan, using a variety of sources and means of producing the raw material making products, including paper and cardboard. This proposal describes a novel combination of raw material supplies and fabrication methods to improve or replace cellulose-base corrugated fiberboard in an economically feasible and environmentally sustainable way. Select species of fungi can convert “waste” into efficient yields of concentrated chitin in a way that has certain advantages over using chitin derived from crustaceans. Using select inexpensive and abundant organic materials, including sawdust, paper, and cardboard waste, and food production by-products, such as spent button mushroom culture material, which would otherwise go to waste, both chitin and chitosan can be produced profitably in large quantities. Fungi that produce chitin can be cultured on or within many different substrates, including mycelium waste from Aspergillus niger fermentation that produces citric acid used in foods (80,000 tons of waste/year), waste from common mushroom culture (Agaricus bisporus 50,000 tons of waste/year, U.S. alone), textiles, rugs, and sisal rope waste. In fact, any material composed of natural plant fibers, including cotton, hemp, and bamboo, may be used by fungi to produce high yields of chitin.

With an abundant supply of chitin, made inexpensively, cardboard can be manufactured with the aid of “electrospinning” techniques, by which fibers of selected diameter and length may be mass-produced. With such selectivity of fiber diameter and length, electrospun chitin or chitosan fibers laminated with chitin-base films into corrugated mats offers the manufacturer the ability to modify such properties as strength, porosity, flexibility, plasticity, water-resistance, oil-resistance, elasticity, and even gas and vapor permeability in the final product, such as a box or other type of container or shipping material. Basic electrospinning equipment consist of three major components: 1) a high-voltage power supply, 2) a spinneret (a kind of metallic needle, or array of needles), and 3) a metallic, conducting collector surface. With this basic configuration, a high-voltage direct current (DC) power is supplied to the spinneret, which is hydraulically connected to a syringe pumping apparatus which injects the polymer solution to be spun, while the collector is usually ground- or negatively biased.