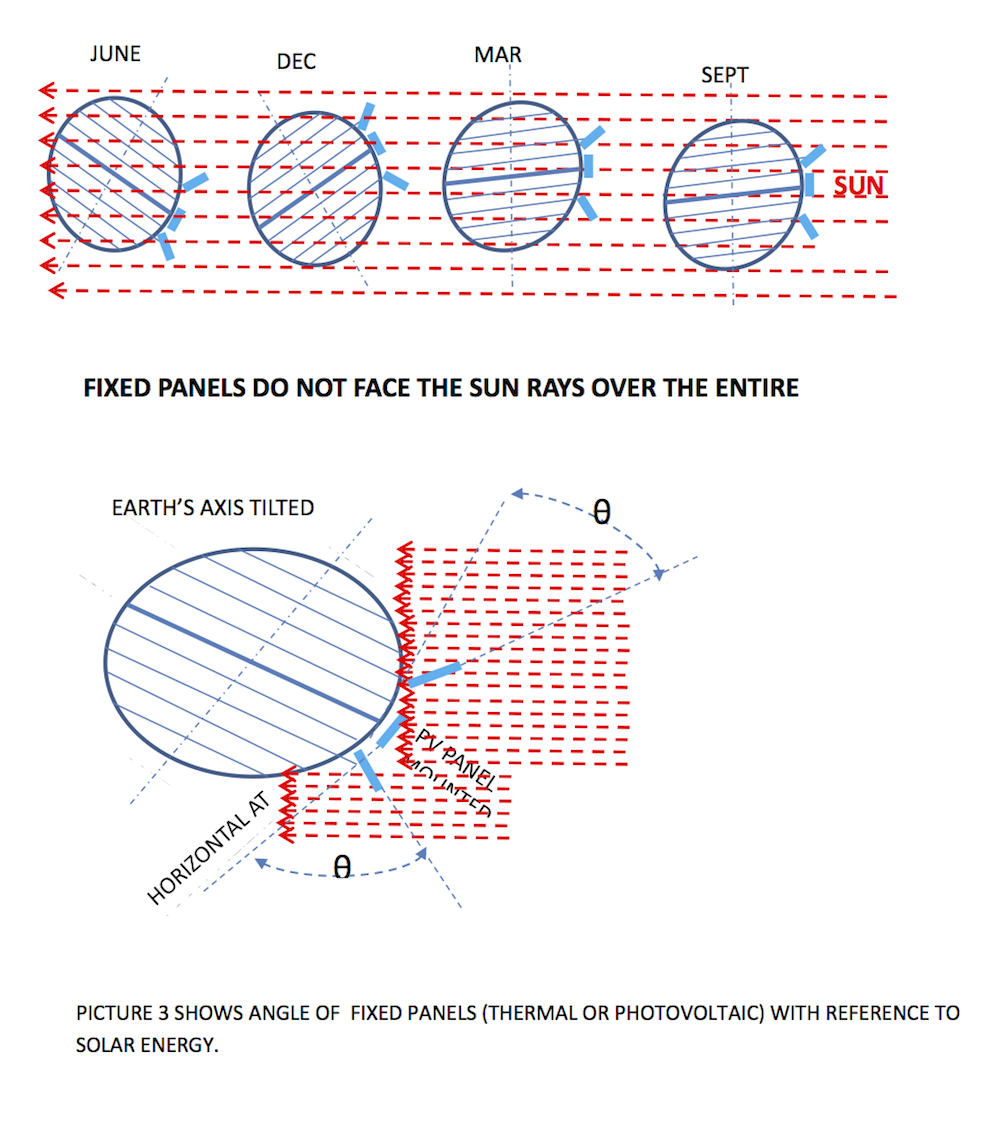 World is looking forward to increasing electrical energy generation through renewable energy sources. Solar thermal has fallen way behind solar photovoltaic due to WRONG belief that it is inefficient. Installed Solar PV plants are known to have an efficiency of just about 14%. In the case of solar thermal power generation, solar energy focused on to some boiler using concentrators. Huge power plants have been installed around the world. Pictures of a few large installations around the world have been attached here. But did the scientists design these wrongly creating a WRONG belief that solar thermal plants are inefficient and expensive?

Solar photovoltaic panels are mounted at a specific angle facing the sun’s orbit based on the latitude of the place of installation. As shown in picture 1, fixed angle of mounting itself results in about 20% loss of power over a whole year as the panels are not facing the sun from morning to evening and also over the whole year depending on the latitude. Further, by not utilizing the land below solar PV installations for horticultural purpose, the solar PV also gets hot and operates inefficiently as it gets hotter due to reflected energy from the land.

The mathematical computation of angle of mounting for capturing solar energy depending on the latitude is the same irrespective of whether the installation is photo voltaic or thermal. Inefficiency occurs due to the concentrator panels not facing the sun all the time. Look at picture 2 and picture 3 where so many concentrators have been installed, but it can capture only a fraction of actual sun’s energy falling on the earth’s surface. Hence I consider these design to be wrong right from conception stage!!!! If one makes a mathematical analysis at any point of time and on minute-by-minute, hour by hour analysis, it is obvious that these solar thermal energy capture mechanisms or process is wrong and inefficient. Add to these other processes inefficiencies of downstream processes after the energy is captured. World is WRONGLY focusing on solar photovoltaic to convert clean renewable energy to electricity.

Solar photovoltaic captures sun’s energy only in visible region whereas sun’s energy is spread over ultraviolet as well as infrared energy. Hence solar thermal energy must also be captured through glass panels similar to solar PV, not by using any tube or a boiler etc.