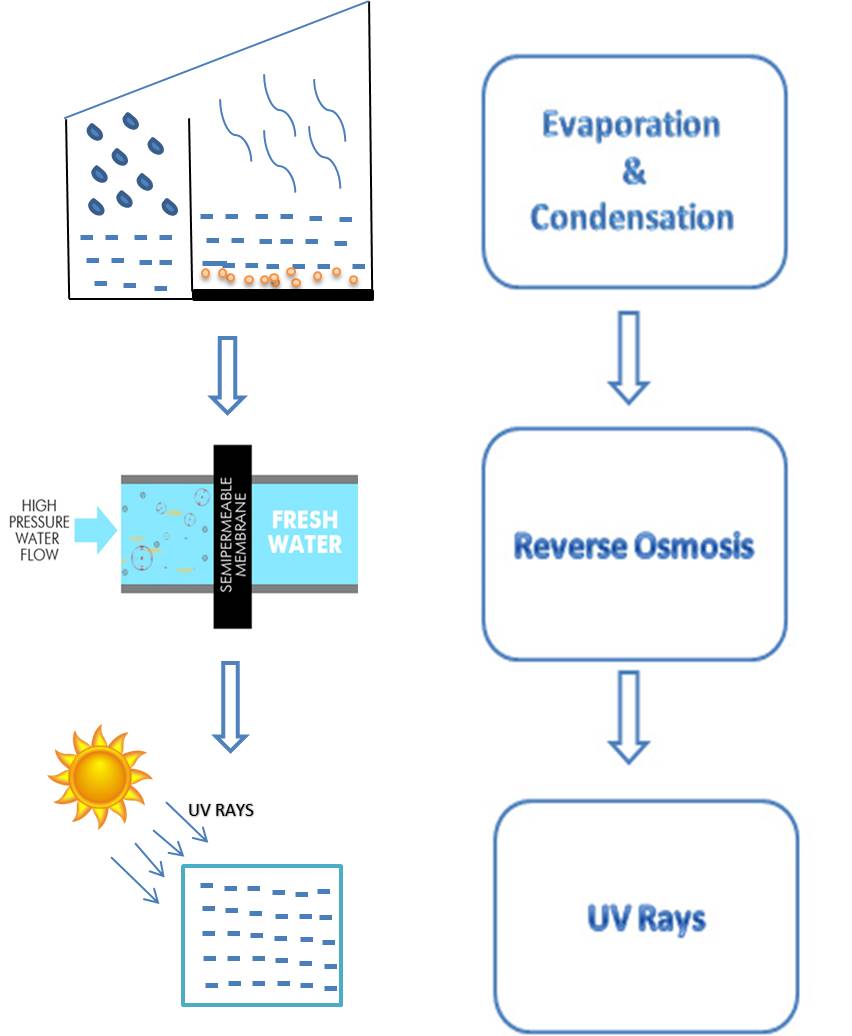 In developing countries, the problem of drinking water is becoming increasingly important, due to the population growth and rising living standards. Desalination of seawater and brackish water is now possible to meet the demand for potable water. The main objective of the present work is the study of a plan solar still with greenhouse effect. We have especially worked on the determination of operating characteristics and production. During the period of experimentation, different parameters have been mainly a series of measurements: solar radiation, the temperatures of different parts of the setup (internal pane of glass, internal air, and water in the tank) and the daily production. The concept of evaporation, condensation, reverse osmosis and UV rays is used for purification of sea water.

In solar distillation operation water to be cleaned is poured into the still to partially fill the basin . The glass cover allows the solar radiation to pass into the still, which is mostly absorbed by the blackened base. The water begins to heat up and the moisture content of the air trapped between the water surface and the glass cover increases. The heated water vapor evaporates from the basin and condenses on the inside of the glass cover. In this process, the salts and microbes that were in the original water are left behind. To increase the speed of the process the base will be equipped with heating element that will have a supply from solar energy.

After this water will be taken to the next chamber where a process of reverse osmosis will occur. Reverse osmosis is a process in which two chambers are divided with a semi permeable wall. On the impure water side a pressure is generated which helps the water flow through the semi permeable wall leaving behind the impurities this helps to purify the water upto 90-99%. Pressure can be generated using solar heat energy as pressure is directly proportional to heat.

RO also involves an ionic exclusion process. Only solvent is allowed to pass through the semi-permeable RO membrane, while virtually all ions and dissolved molecules are retained (including salts and sugars). The semi-permeable membrane rejects salts (ions) by a charge phenomenon action: the greater the charge, the greater the rejection. Therefore, the membrane rejects nearly all (>99%) strongly ionized polyvalent ions but only 95% of the weakly ionized monovalent ions like sodium.

After the process of reverse osmosis the water is purified to a large extent but some bacteria are still present in the water for their removal the UV RADIATION process is used. Sunlight consists of three types of UV rays: UV-A, UV-B & UV-C. Out of three only UV-A and some amount of UV-B Rays reaches earth. The exposure of water to UV-A rays will kill the bacteria and viruses present in the water giving out a pure drinking water.