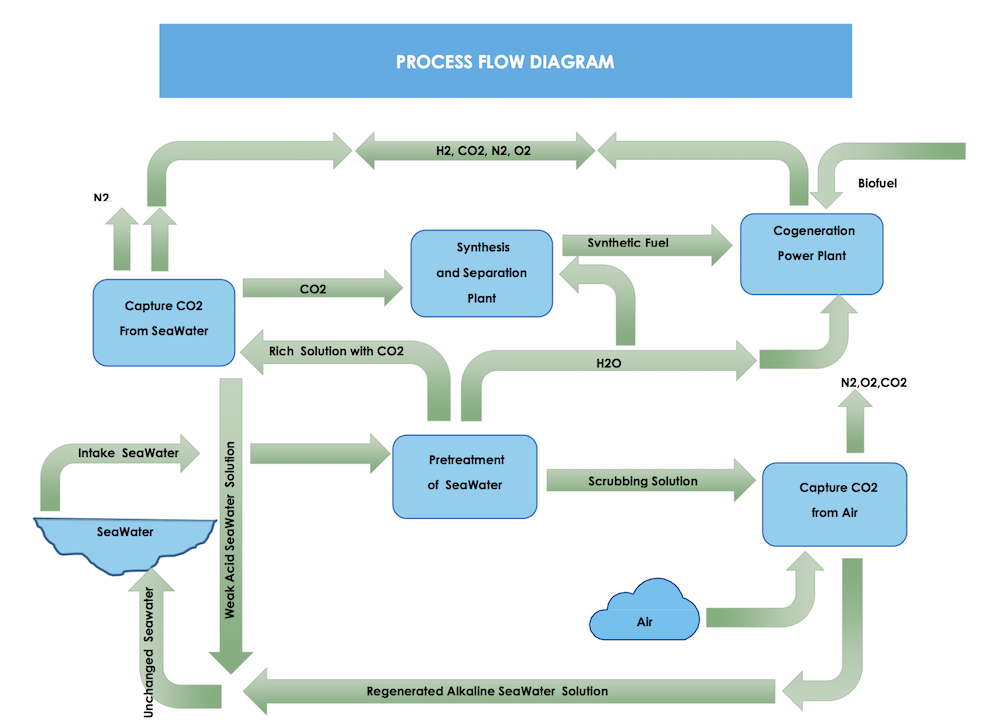 The main purpose of this system is diminish carbon dioxide content both in the seawater and in the air by reducing and balancing its composition in order to mitigate world global warming. Mass transfer gas phase from the air to the liquid phase (seawater) is slow and it is taking about eight months for reaching a chemical equilibrium, but with the method described out in this paper It would take a few minutes in a closed loop cycle where the seawater is returned at the same location and in the same chemical composition and physicochemical properties which had been extracted with.

This paper deals with a pretreatment of seawater by splitting up in three streams, one of these is carrying over a scrubbing solution for using in Capture CO2 from Air, the second one is transport deionized water which is going to use in a power plant and for synthetizing fuel, the third one contains a rich solution with high contents of dissolved CO2 which is sent to a capture CO2 system.

One carbon neutral fuel is synthetized and regenerated in a closed cycle as an intermediate compound for generating power in a cogenerative system which combined thermal and electrochemical power for such purposes. Unfortunately, this method needs to support with a little supply of biofuel or other biomass sources with a high content carbon: hydrogen ratio acting as a renewable energy. We must emphasize that the whole C02, O2, H2 is reused in a closed cycle in order to produce this synthetic fuel.

Proper location for sucking out seawater is nearby to limestone geological formation because it is a source of carbonate ions which are formed by contacting with the waves in the coast.

Temperatures in the whole process are moderates (250 °C-350°C) in order to avoid nitrogen oxides (N_x O_y)which cause global warming as well.

Concentration CO2 in air today at 2016 is 407.7 ppm
Proper Concentration for atmospheric CO2 in the air is about 300 ppm.

Therefore we have about 1.5x?10?^12 tonnes of atmospheric CO2 for extracting in this process the same amount will be produced by exploiting this compounds in the oceans. This conclusion was done without taking into account the total amount of Carbon dioxide in excess as a dissolved gas and as an ionic compound which can be obtained in seawater composition and thus avoiding extra supplying of biofuel.