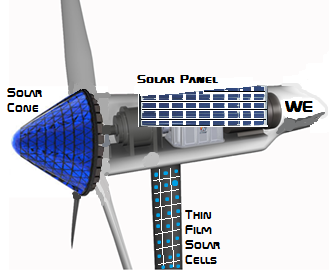 The “silo” approach to energy production is outdated and SWind (Solar/Wind) stations are the future. Utilizing the technology developed for both wind power and solar power generation. These technologies will not be separate from each other but will be an integrated, stacked system on a single platform. This systems approach will take advantage of the same amount of usable space and hardware as each structure separately, which will save space, material, money and time, while taking advantage of periods of peak energy production.

This structure optimizes the amount of valuable space required for construction by placing solar panels onto wind towers which also reduces unutilized surface area, maximizing the structural surface. The integration of wind and solar power into a single unit will conserve money as well as time due to the materials needed for the separate construction of both. Using both solar and wind power cooperatively creates a near constant flow of electricity taking advantage of peak times and seasons.

Solar and wind patterns remain relatively unstable and forecasting is extremely valuable yet not completely accurate. Using a system comprised of both wind and solar energy will effectively take advantage of inaccuracies in prediction and fill gaps in energy production. The accumulation will be highest during the middle of the day when there is increased sunlight and wind and also when there is increased use. Furthermore, when solar output is normally lower during the Winter months the wind is at a yearly peak, and during Summer solar is at a high and wind is normally decreased. This yearly wave like pattern of both energy sources compliments each other when using the SWind system.

The SWind system utilizes the same technology that has been tested and in use for decades and places it onto a single platform. The advantage of this is a more efficient design with decreased use of land and materials. This hybrid system integrates rotating solar panels at the hub of the forward rotor position of the wind generator and lining exterior surfaces. The high altitude area coupled with wind will cool the solar panels, despite direct sun light which normally degrades the efficiency of solar panels. When wind decreases solar power will engage the rotor in order to continue the flow of electricity or switch to solar power alone, disengaging the rotor.

The advantage of the SWind system isn’t only in efficiency but in location such as disaster areas where flooding will cover low lying solar panels, to high pollution regions which reduces sunlight to ground stationed panels. In addition, as stated previously, the reduced “footprint” of land use for development of the SWind stations will increase the energy production of smaller areas and dense urban environments. The inefficiencies of segregating power generation must cease as the energy consumption of the world increases, hybrid technologies such as SWind stations are solutions to a myriad of technologies waiting for a shift in energy production philosophy.