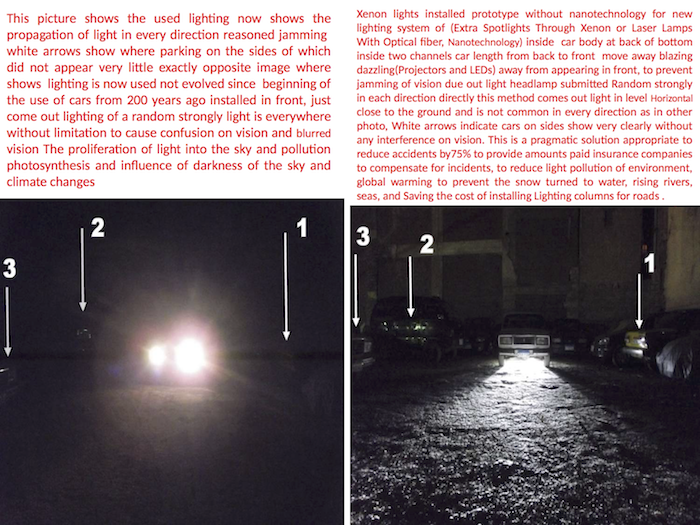 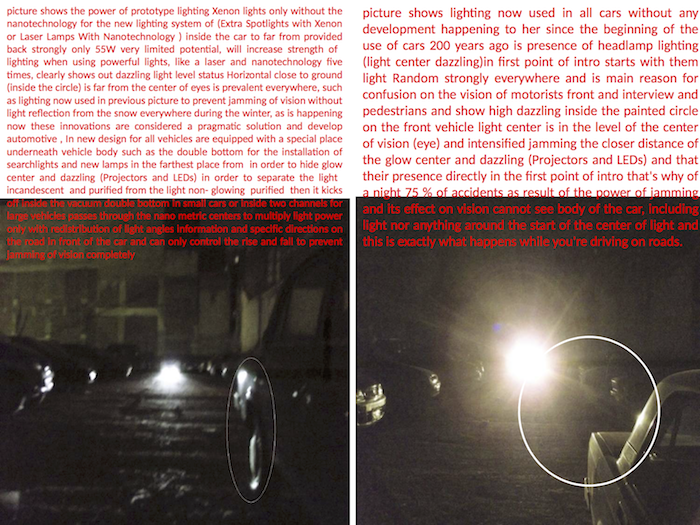 The present invention relates to strong lighting by using optical fiber and nanotechnology for vehicles. Optical fibers are used with luminous element inserted such as florescent, white or red phosphor or zinc sulphide treated with nanotechnology. They are used with laser lamps, lead, or xenon to enhance night vision and to redirect strong lighten to a horizontal level near to the ground to avoid vision problems affecting drivers during driving at night. According to the present invention, two channels are arranged along the bottom part of a vehicle. In another aspect, a double bottom part is established.

The length of the two channels gives space inside in which strong lights are mounted, inside the vehicle body away from the head. In front of the lamps, light distribute is mounted to hide the glow behind it distributor separates and distributes such glow on the sides to reduce its velocity (300.000). The distribution purifies the illumination. Such purified light is, then, redirected to the sides and then to the front part to radiate through optical fibers and luminous elements and along a vehicle. Magnifying lenses are arranged to enhance and strengthen the radiated light (purified) and prevent disruption.

Automatic sensors are arranged on all vehicles at sight level of drivers to control the light outlet up and down to avoid glowing light from vehicles in front or behind. It is an effective way to reduce car accidents resulting from light shocks which causes sudden blindness, the essential reason for 75% of accidents occurring at night. The first main reason of night-vision accidents jamming to presence of inflammation dazzle centered in front of the vehicle directly from which light powers such as xenon lamps or laser quickly to strike forcefully cannot optic nerve (eyes) afford it procure paralyzed in the ability to see. Installation place (searchlights and powerful LEDs) in front of the vehicle directly since the invention of first car in 1886 until now did not happen to him any development, in order to reduce the deaths of one million and quarter per year with 50 million non-fatal injuries and 500 billion dollars in material losses according to the World Health Organization.

The light pollution causes other environmental problems such as enlightening sky, increase in the temperature of the earth, snow melt down, increase of the water bodies’ level and strong wind and tornado's, the inappropriate or excessive use of artificial light – known as light pollution – can have serious environmental consequences for humans, wildlife, and our climate.

By joining IDA you can make a difference in protecting our Planet, saving billions of dollars in wasted energy, and connecting future generations with our legacy of starry skies.