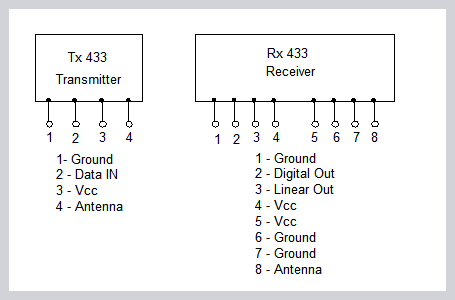 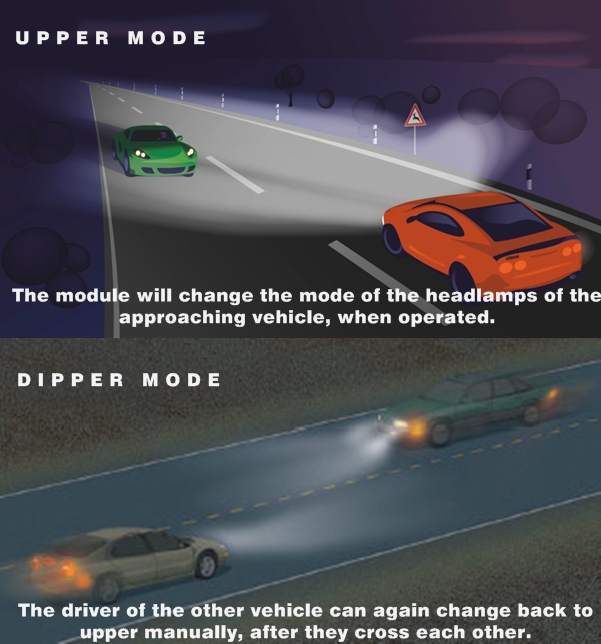 One often comes across this irritating situation while driving at night, when the headlight lamp from an approaching vehicle from opposite side glares directly into the eyes of the driver, making things difficult to assess, and increasing the possibility of an accident. Such situations are normally tackled by using manual dipper switch mechanism, where the driver is prompted to "dip" the focus of his headlight. Till date, all advancements made in this direction have a motive to automatically change the dipper of one’s own vehicle. However, this proposal comprises of a circuit which would help the driver of one car to lower the dipper of the approaching car, if he feels it is necessary, using a toggle switch.

The entire circuit is based on the 433 MHz Transmitter-Receiver RF Modules. They have a range of 100 meters under standard conditions. On the transmitting side, the Power Supply Board is connected to the RF Transmitter. When the Toggle Switch is pressed, the Transmitter sends Amplitude Shift Keying (ASK) signals. At the receiving end, the signal is picked by the antenna of the receiver module, which is again powered by the Power Supply Board. This ASK signal activates the Relay circuit, which goes on to change the Headlamp mode of the approaching vehicle from upper to dipper. Relay is an electromagnetic switch which operates when current is flowing through its coil. Connection of upper beam is given to NC (normally closed) terminal; dipper beam is given to NO (normally open) terminal and common is connected directly connected to 12 V supply. The transformers step down the voltage from 230 V AC to 12 V AC. The entire setup has been assembled on a bread board.

The modules are easy to build and the entire arrangement costs around $15 to $20 (USD). They can be easily accommodated into the existing circuits of the automobile headlamps. The provision for human intervention allows for greater safety as the driver can easily change the upper to dipper of the approaching vehicle if he feels uncomfortable. In fully manual upper-dipper controls, the driver cannot do anything about the headlamp controls of the approaching vehicle. This often leads to accidents. However, fully automatic controls are very expensive and cannot be implemented as an accessory in all vehicles.

This economic proposal will go a long way in strengthening automotive safety. Instead of making it fully automatic, a little human intervention acts as the main pillar behind the novelty of this project. The use of control switch is completely based on the need of driver thereby avoiding the problem of headlight glare.