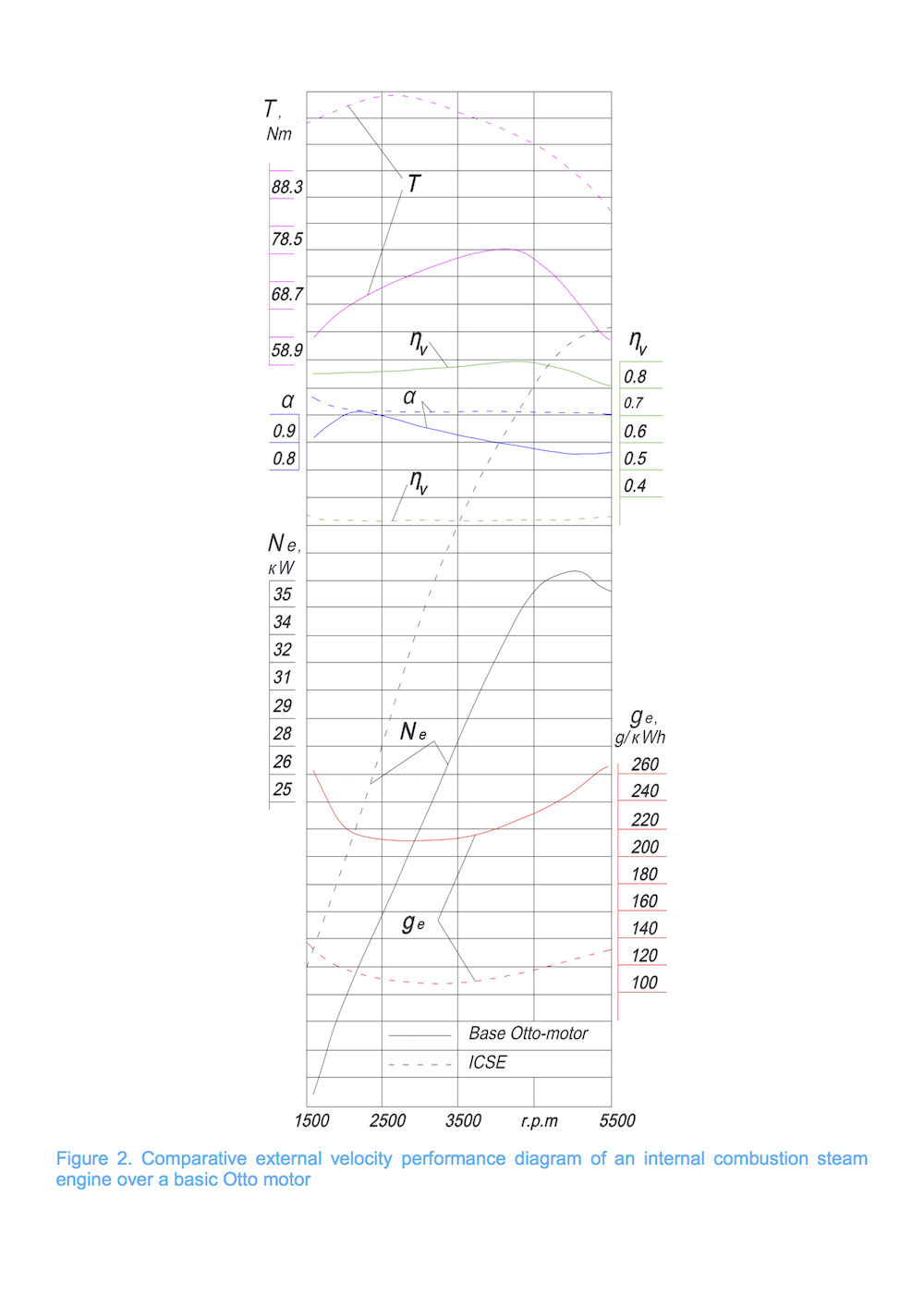 The aim of improving the economic and environmental friendly Otto-motors and Diesels parameters is an offer of a new cycle realization. This new cycle presupposes the generation of an expanding water steam, as a working fluid exclusively by direct heat transmit way from the combustion elements of the standard fuel-air mix inside the engine combustion chamber before of an each piston-working stroke. The new cycle can be embodied in the future engines and in the basic world with Otto motors and Diesels real prechamber designs also.

Preliminary calculations showed such ICSE fuel efficiency can be considerably higher from Otto cycle fuel efficiency and the obtained ICSE characteristics can be nearly same to those 6SCSGE and to the highly-advanced classical locomotive steam engines cycles.

There are several basic designs for the realization of the internal combustion steam engine cycle.

Design #1. According to the authors, the design could be built on basis of the prechamber combustion Otto motor. A power plant scheme of method 1 realization is given in Figure 1. The technology functions by this way: the fresh air is induced into the main combustion chamber during the intake stroke, and the fuel-air mixture -- to the prechamber. Near the end of the compression stroke, a special water injector sprays water (water mist) into the main combustion chamber. Parallelly to the water injection process, the spark plug ignites the combustible mixture concentrated in the prechamber. The combustion products from the fuel-air mixture in form of a powerful stream through a connecting channel into the main combustion chamber expire, where they transform the water mist into expanding water steam. Each power stroke is the result of the expanding water steam force, similar to the functioning of a traditional steam engine. The exhaust steam-gas mixture stroke is realized by traditional methods.

The internal combustion steam engine technology proposed here is more preferable for use in new or already existing Otto motors or Diesels, such as the 2-stroke engines, 4-stroke engines, rotary engines, quasiturbine engines, and others. Our technology makes possible a more complete utilization of thermal drop for power generation. As shown by our modeling results, the indicated thermal efficiency could be increased nearly twice. On the external velocity characteristic diagram that is given on the Figure 3, we also note a significant power and torque increase with a concurrent decrease in fuel consumption.

At the same time, as we can see from the analysis of kinematic schemes, the engines working by the ICSE cycle can have a simple structure.