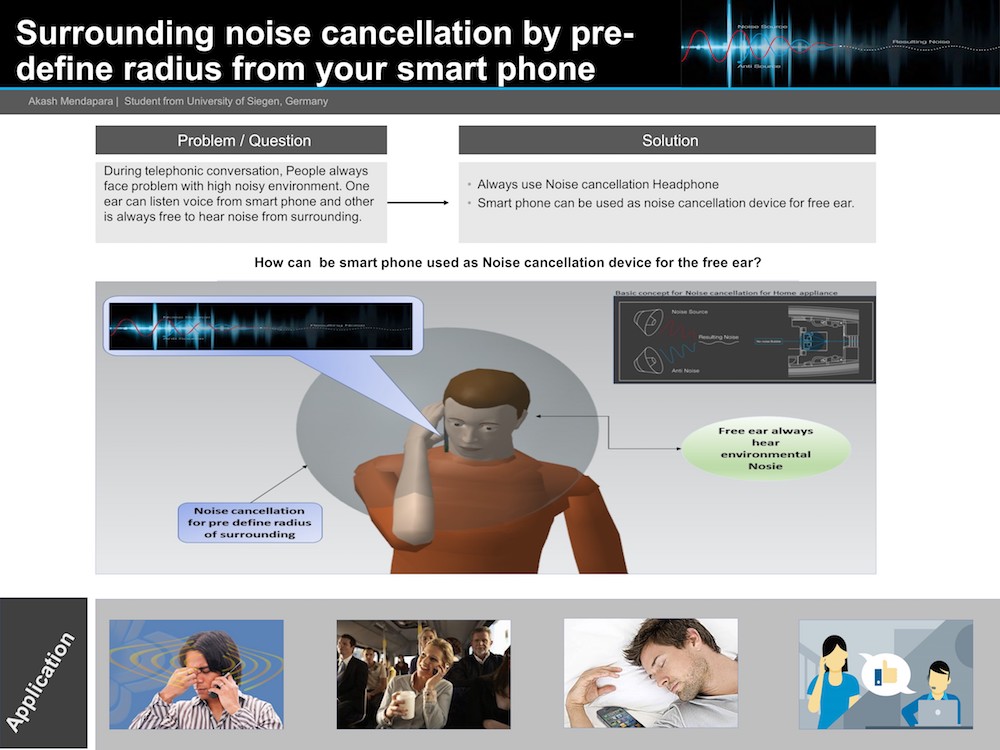 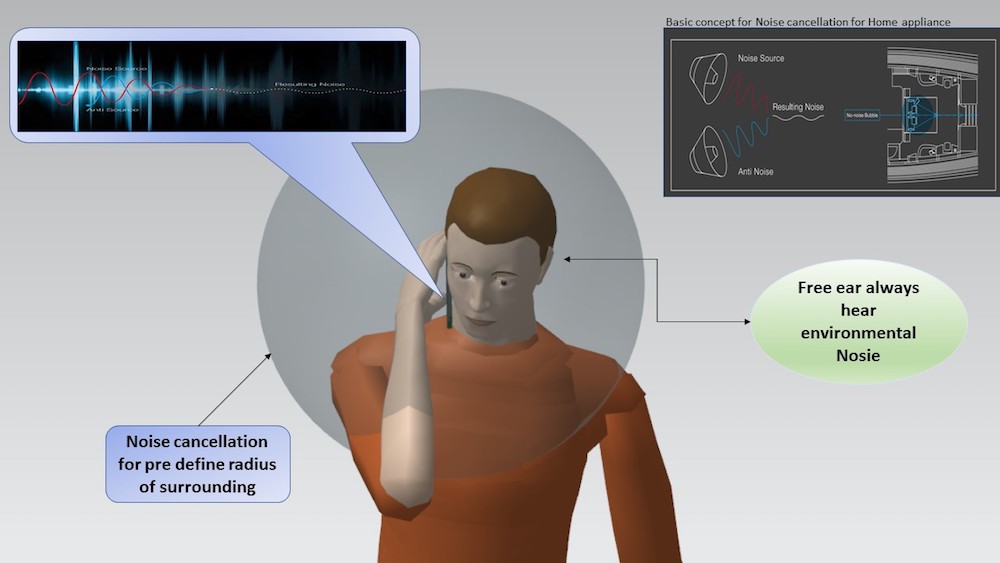 “People need to be smart about how they use their smartphones”

A smartphone presents more advanced computing capabilities, abilities to place and receive voice calls and create and receive text messages, with those of other popular digital mobile devices like personal digital assistants (PDAs), such as an event calendar, media player, video games, GPS navigation, digital camera and digital video camera. Every day new feature and technology are developed for the smart phone.

Problem: During telephonic conversation, People always face problem with high noisy environment. One ear can listen voice from smart phone and other is always free to hear noise from surrounding.

Smart phone can be used as noise cancellation device for free ear:
Active noise control (ANC), also known as noise cancellation, or active noise reduc-tion (ANR), is a method for reducing unwanted sound by the addition of a second sound specifically designed to cancel the first. Sound is a pressure wave, which consists of alter-nating periods of compression and rarefaction. A noise-cancellation speaker emits a sound wave with the same amplitude but with inverted phase to the original sound. The waves combine to form a new wave, in a process called interference, and effectively can-cel each other out – an effect which is called destructive interference.

Modern active noise control is generally achieved through the use of analog circuits or digital signal processing. Adaptive algorithms are designed to analyse the waveform of the background aural or non-aural noise, then based on the specific algorithm generate a signal that will either phase shift or invert the polarity of the original signal. This inverted signal is then amplified and a transducer creates a sound wave directly proportional to the amplitude of the original waveform, creating destructive interference. This effectively reduces the volume of the perceivable noise.

A noise-cancellation speaker may be co-located with the sound source to be attenuated. In this case, it must have the same audio power level as the source of the unwanted sound. Alternatively, the transducer emitting the cancellation signal may be located at the location where sound attenuation is wanted (e.g. the user's ear). This requires a much lower power level for cancellation but is effective only for a single user. Noise cancellation at other locations is more difficult as the three-dimensional wave fronts of the unwanted sound and the cancellation signal could match and create alternating zones of constructive and destructive interference, reducing noise in some spots while doubling noise in others.

Application:
• Easy to hear voice from smartphone
• Smart phone is used to make silent environment while sleeping.
• Effective communication can be achieved.