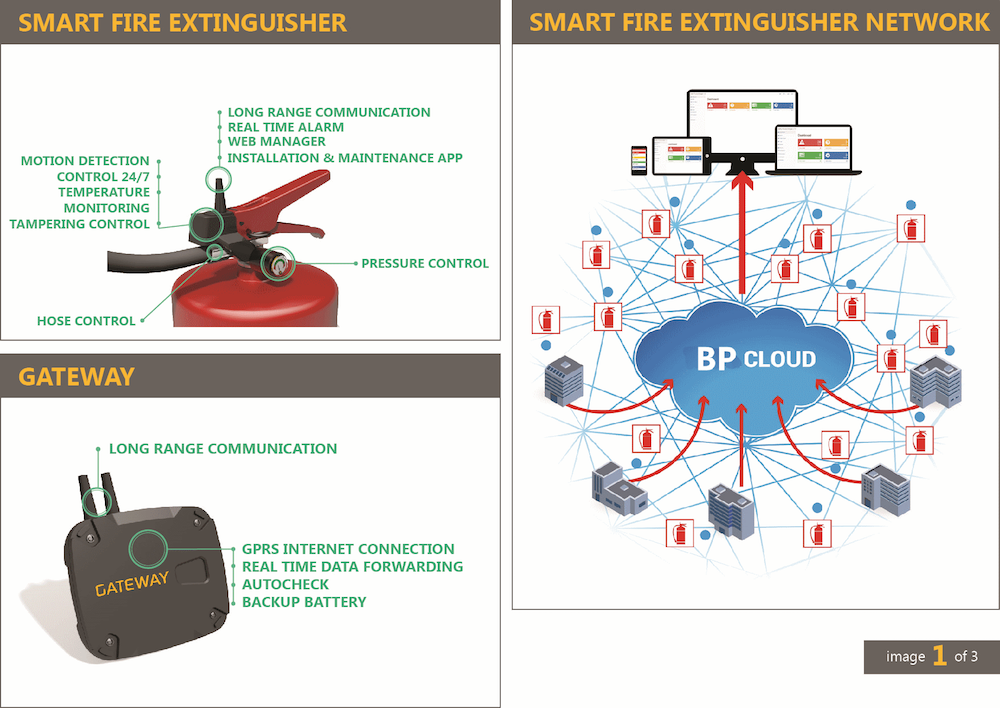 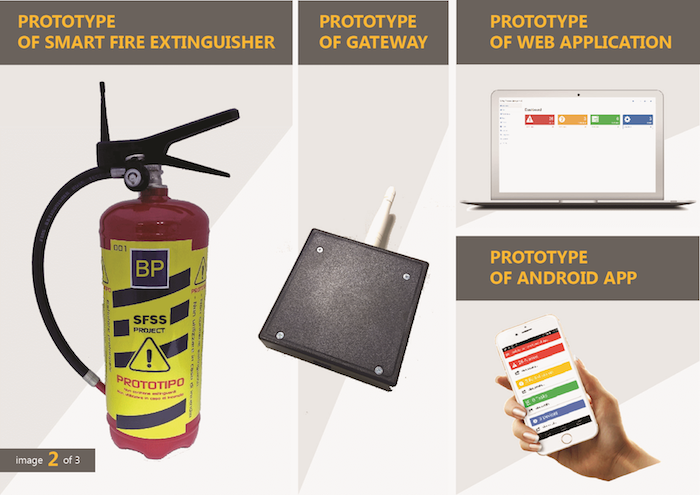 The idea of the project stems from the mission of the team: «Bring Innovation Into Safety Systems». To do this, we have created a start-up. To make it «unique», we have patented the idea at an international level. Today, the patent has been recognized in Europa, United States of America, Canada, China and Australia.

The project, named Smart Fire System Safety (also known as SFSS) is a System made up of Hardware, Software and Cloud services, a natural evolution of mechanical elements of the extinguisher, which have been made «Smart» thanks to new technological contents which can monitor its parameters and quickly notify any malfunction.

SFSS system brings huge innovation and it is one-of-a-kind at an international level. The system can overturn the current paradigm of a project that must be monitored to a System warning you when something is wrong.

The infrastructure of the SFSS system is composed of a Smart component installed on the extinguisher handle (1)[SFSS-FEC] which monitors 24/7: pressure, hose, movement, shear pin, temperature and sends this data, through Long Range™ technology, to a gateway (2)[SFSS-G] which is in charge of receiving and forwarding data with specific IoT protocol, to a highly scalable and reliable Cloud platform (3)[SFSS-Back-End] which, in case of problems, sends alarms to an operative center or directly on Smartphone (4)[SFSS-Front-End], to make sure the relevant technicians can quickly intervene on the spot. The software of the SFSS system also allows tracking the installations along with the position of the installation of the extinguisher, to monitor both ordinary and extraordinary maintenance activity carried out on the extinguishers.

SFSS system evolves and replaces the current concept of an extinguisher, by creating a more efficient and better working infrastructure, improving safety in all places where its installation is required, like for instance: Hotels, restaurants, hospitals, schools, trains, cruise liners, theaters, power plants, oil plants, etc.

Some prototypes of the SFSS system have also been developed to test the Long Range™ technology and all the elements of the infrastructure. The prototypes are working and all the tests have gone well. Current extinguishers can easily be fitted with SFSS system, which can be produced on a large scale. Our goal is now to industrialise the product to be able to sell it at an international level replacing the current extinguishers.

SFSS system gives advantages to:
• all people: the SFSS system guarantees the best level of protection against fire risk, as well as the first installation of the fire extinguisher.
• the maintenance worker, making installation, control, maintenance planning procedures easier , faster, and making sure activity gets tracked and objectively monitored ;
• the end user, who can keep the state of use of their fire-extinguishing safety system continuously monitored (near-real-time). The system also efficiently supports the person in charge of safety;
• the safety boards (i.e. firemen, first aid operative centers) who can be warned in case of danger.