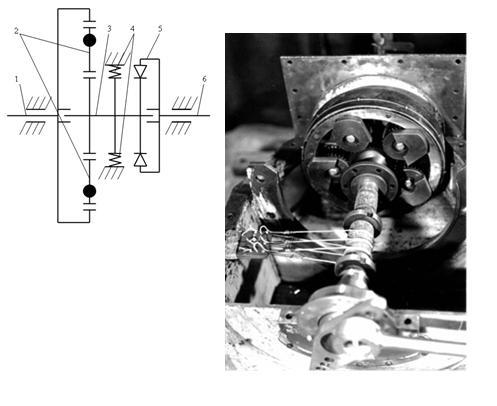 The inertial continuously variable transmission is a mechanical transmission which is based on the principle of inertia. This transmission has a lot of advantages, namely: compactness, minimum friction losses and high efficiency as a result of the relatively small number of rotating components, a wide range of transformation of the torque. It does not need any conventional friction clutches. This transmission protects the engine from overload when the output shaft is braked. This drive guarantees optimum conditions of work for the engine regardless of the changing of load, and smoothly changes output speed according to the load. Mostly, design of this transmission consists of a pulsed mechanism with unbalanced inertial units and two overrunning clutches. The objects of the investigation are structural dynamic analysis of the continuously variable transmission. The physical and mathematical models of this transmission are developed. For these models of the transmission the differential equations of structural dynamics in the form of second kind Lagrange's equations were developed. Dynamics of the transmissions is described by systems of substantial nonlinear differential equations. In general, precise methods of solution for such equations do not exist. Therefore, in practice, approximate analytical and numerical methods must be employed. Each approach has its advantages and disadvantages. Besides, the nonlinear differential equations were solved on the basis of Runge-Kutta numerical method. The described methods allow increasing the durability of the transmission and created transmission with higher level of reliability in comparison with existing designs of such a kind of transmissions. In this paper, a new design of the inertial transmission with only one overrunning clutch is suggested. This transmission provides a high level of the load ability. Besides, the periodic solutions of the equations were also received by means of the numerical methods. Optimal working modes of the transmission were found using these periodical solutions.