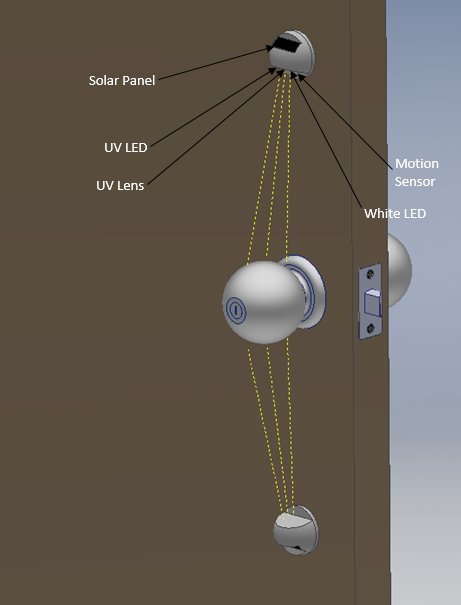 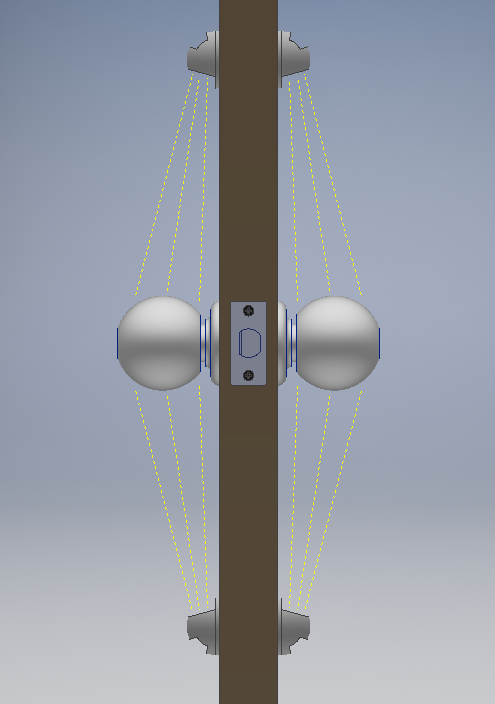 In this system two modules are to be placed on opposite sides of each door knob as well as a sensor mounted on either side of the door to detect the presence of a human for safety. The two modules will contain an ultraviolet (UV) LED which will produce UV light with the optimum wavelength for killing a large percentage of germs, bacteria, and viruses exposed to it. They will also contain a white LED so the door knob can be seen in the absence of any other light or in the event of a power outage. The system will be designed such that it can be retrofitted to any existing door minimizing the installation cost. It will also be fitted with a solar panel and a battery so the system is powered by any ambient lighting that is already present in the surrounding area. The installation of this system would greatly reduce the risk of disease transmission through contact with door knobs or potentially any other surface that has frequent human contact. There are manufacturers overseas that are willing to produce this system, but competition from other manufacturers within the United States would be welcomed. There is a patent pending on this system.

Many public spaces can benefit from this system including; hospitals, doctors offices, airplanes, airports, residential environments, office spaces, amusement parks, food service, trains, and train stations to name a few. There are also variants of the system that can be applied to different types of door knobs and even beyond door knobs to other frequently touched appliances including; keyboards, computer mice, ATM machines, toilets, paper towel dispensers, and machine controls to name a few. With the increasing threat of pathogens in our world it would bring some piece of mind to people knowing that steps are being taken to decrease the transmission of germs from person to person, room to room, building to building, and even country to country.