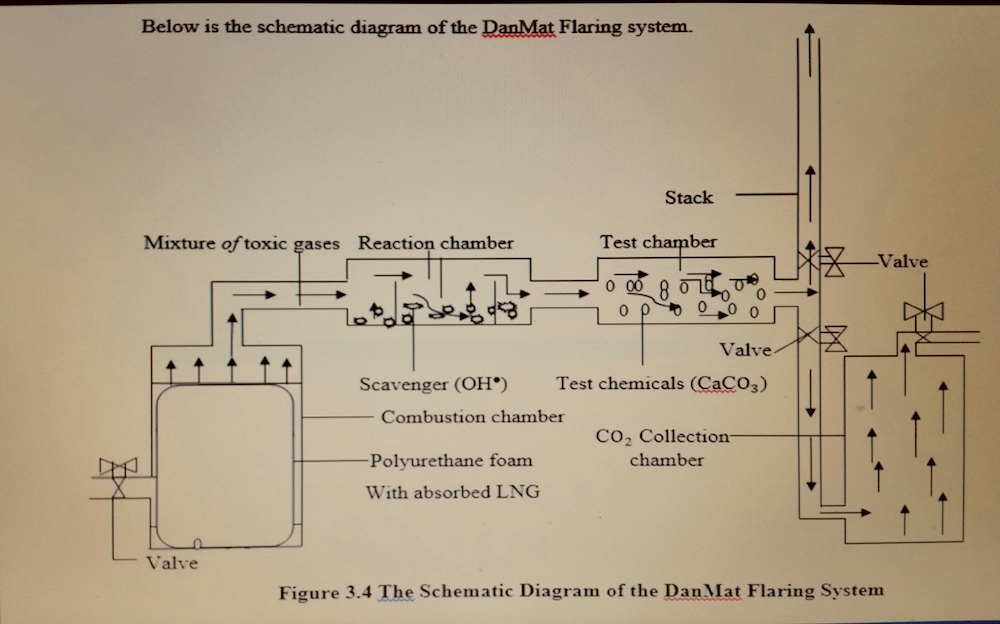 The nature of Gas Flaring processes have created a severe impact on man and the environment. Massive environmental degradation as a result of flaring activities has led to fluctuations in climate as well as depletion of the vegetation cover through acid rain. Findings have been made on some harmful gases released into the atmosphere that have effects on the environment and also on man. In order to control these effects by ensuring a clean atmosphere and environment, a new flaring model (DanMat flaring model) has been suggested.

The model uses smoldering mechanism and insulation method to reduce the amount of heat (about 1500 degrees Celsius ) released into the atmosphere during conventional flaring by 100%. It also uses scavengers to oxidize harmful gas produced during flaring activities into less harmful ones. With this model one can flare gas without hurting even a fly in the environment.

The foam has distinct permeability which allows the flow of fuel (gas) through it. The gas to be flared is liquefied (LNG) so that more of the gas could be absorbed into the foam through its permeable pores and within an Enclosed Insulated Chamber the polyurethane foam together with the absorbed LNG is burnt.

The enclosed insulated chamber (combustion chamber) is designed to control the exposure of the burning process to excess oxygen, since the presence of excess oxygen will cause the smouldering mechanism to burst into flame due to the absorbed liquefied gas, thus the absorbed gas makes the foam more combustible. In this case, the burning process is kept under smouldering mechanism.

Although smouldering also produces heat of about 600 °C compared to about 1500 °C, the temperature of the flame produced during conventional flaring. Smouldering thus reduces the heat temperature by 60%.

The Polyurethane foam is also a good insulator, so the combustion chamber is insulated using some of the foam. This totally prevented the remaining 40% of heat to be released into the environment, thus 100% total heat elimination.

Smouldering is often accompanied by smoke (Carbon monoxide CO); this smoke together with the mixture of gases released from the combustion chamber is then channeled through a pipe to another chamber called reaction chamber.

This chamber is designed purposely for the reaction of the released smoke or mixture of waste gases and a Scavenger (H2S, CO, and NOx scavenger). The scavenger considered is the Hydroxyl ion in its neutral state. The scavengers feed on these gases in the form of chemical reaction.

After the reaction process, Carbon dioxide gas is produced. This CO2 produced is captured and stored for other industrial use or purposes.