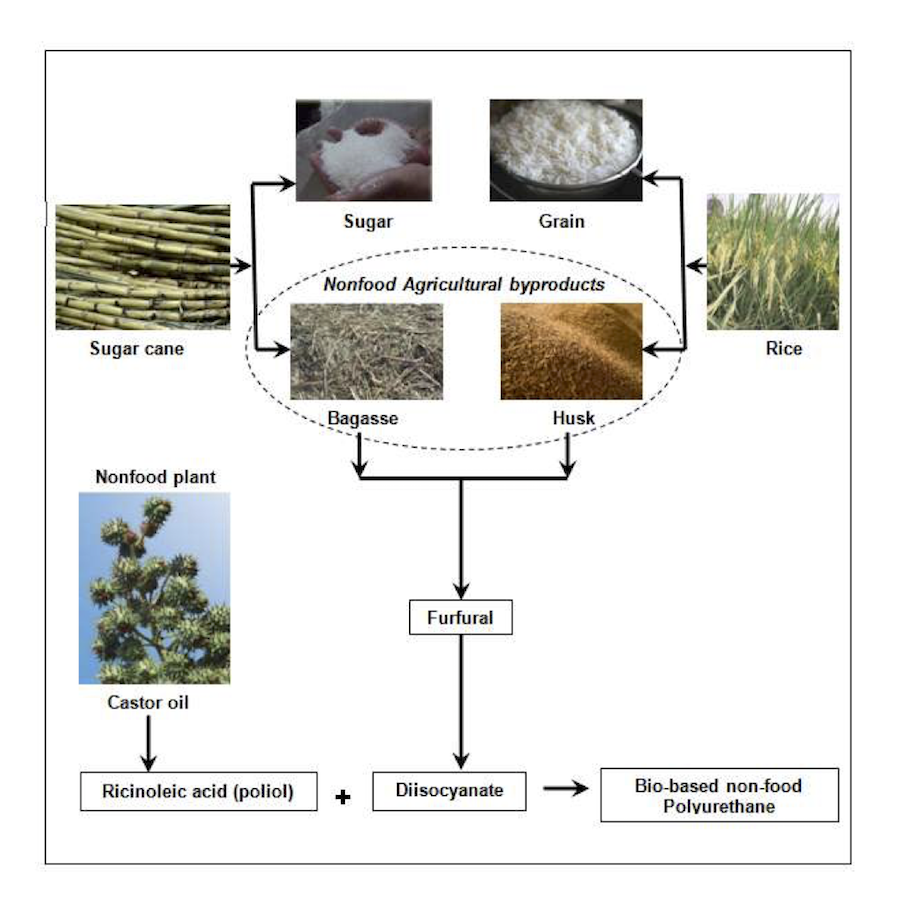 Since its invention by Otto Bayer in 1937 to create a fiber that could compete with nylon, polyurethane (PU) has been widely used worldwide in the production of foams, rubbers, and protective coatings or sealants. polyurethane is a macromolecule or polymer formed by reaction of two precursors, a polyol and a diisocyanate.

Historically, polyols (organic compounds with several hydroxyl groups) and diisocyanates (organic compounds with two isocyanate groups) used as precursors to produce polyurethane are currently derived from petrochemicals (oil and natural gas). The production of these petrochemicals have irreversible environmental effects leading to the need for establishing a new model of industrial development based on environmental and social sustainability. This new industrial development model seeks alternative renewable sources to mitigate the ecological impact of using oil and natural gas as sources for the production of petrochemicals and generation of energy.

Our target is to produce bio-based nonfood polyurethane using castor oil, a nonfood polyol, and a diisocyanate derived from furfural, a nonfood agricultural byproduct available at large scale mainly from bagasse (sugar cane) and husk (rice). Our immediate objective (Phase I) is to demonstrate the feasibility of producing ecological polyurethane that promotes environmental sustainability and meets industrial quality standards at a price competitive with polyurethanes currently produced from petrochemical-based precursors. Phase I also includes the measurement of the mechanic properties following ASTM standards of the polyurethane produced via these two bio-based nonfood precursors.

The possibility of using polyols derived from vegetable oils to replace polyols currently produced from petrochemicals and used as precursor for polyurethane production began to attract the attention of the polyurethane industry in early 2004, basically for three reasons: the rising cost of petrochemicals, the obvious desire of the public for products friendly to the environment, and new environmental regulations. Currently, the polyurethane industry is in the position of using bio-based polyols derived from vegetable oils, produced by several companies. Polyurethanes produced by replacing the currently used petrochemical-based polyols with bio-based polyols have shown promising results.