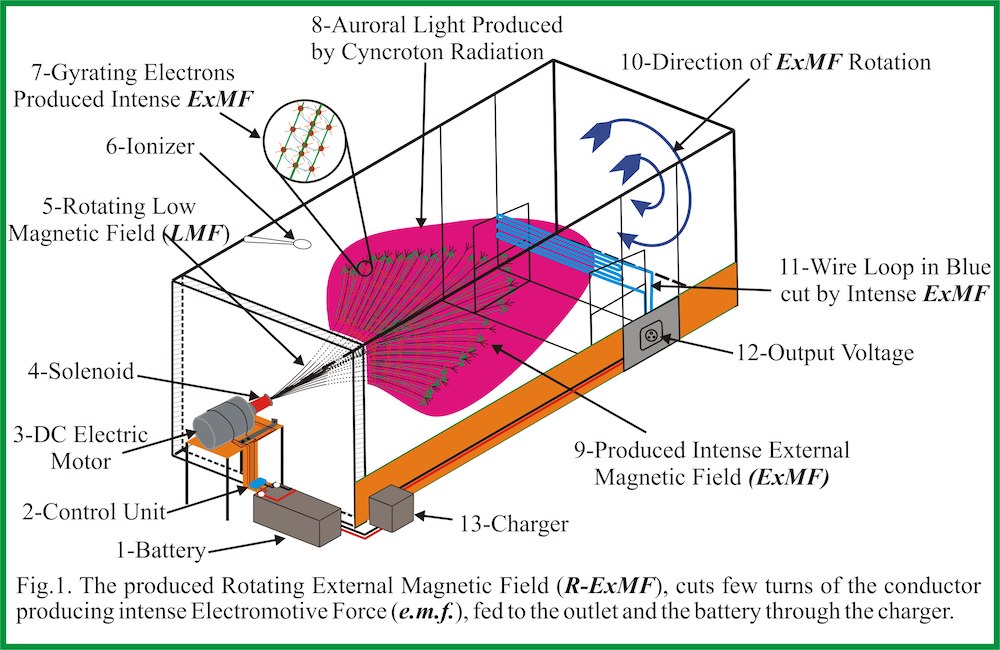 A system generating electricity using External Magnetic Field (ExMF); based on the Universal Energies (UE), derived from the new fundamental physics (http://exmfpropulsions.com), is shown in Fig.1, the system composed of a battery 1, feeding electric current through Control Unit 2, to a DC electric motor 3, and a solenoid 4, which produced Rotating Low Magnetic Field (LMF) 5, the LMF interacts with electrons, ionized by ionizer 6, causing electrons to gyrates in orbits around the LMF producing ExMF per unit orbit 7, the small orbit of gyration with intense ExMF produced Cyclotron Radiation in form of Auroral Light 8, the total ExMF produced by orbital electrons 7, produced Intense External Magnetic Field (I-ExMF) 9, all of which are rotating clockwise 10, a loop of wire in blue color with N turns 11, is cut by intense ExMF 9, producing an intense Electromotive Force (e.m.f.) given at the outlet 12, some of this voltage is fed to charger 13, to charge the battery 1, to work continually.

Since the produced ExMF 9 rotates with the motor 3, it cuts the conductors 11 which have N number of turns, thus inducing electromotive force at the output 12, with the value expressed by:

Where, Φ is flux density in Weber, N is number of wire turns, t is time in second, BEI is the ExMF in Tesla, with the value108 being the number of lines of force in m2 (equivalent to one Tesla) that could produce one volt, l is the length of the conductor cut by the rotating ExMF, vm is the velocity of ExMF (or the speed of the motor) and the e.m.f. ξ is in volts (V).

As different magnitudes of BEI can be produced, ranging from 50 to 1,000 Tesla, therefore any amount of ξ can be produced, hence if this system is connected to a load, electric current will flow across it.

And since ExMF-EG is an Alternative Renewable Energy (ARE), hence it’s an environmental friendly, that will totally eliminate the usage of fossil fuels for electricity generation, which represents in 2014, by coal 40.8%, natural gas 21.6%, nuclear 10.6%, hydro 16.4%, 'others' (solar, wind, geothermal, biomass, etc.) 6.3% and oil 4.3% (https://en.wikipedia.org/wiki/World_energy_consumption), and since ExMF-EG is capable of generating enormous amount of electricity at negligible cost with extra high efficiency exceeding 999%, therefore, a unit can be installed in each quarter, village, town and major cities, eliminating the costly long running cables with many negative aspects; the generation of electricity using such economical method, will allow every house in this planet to be connected with small ExMF-EG, which can run without a need for supervision; therefore, ExMF-EG is an ideal power generator that create the ideal future for the welfare and prosperity of humanity.