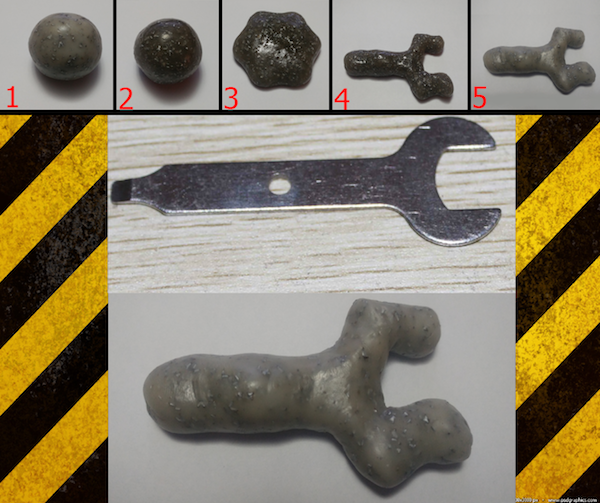 In retrospect the basic idea behind recycling, is to reuse materials from an existing structure or product in to a new structure or product. But recycling usually takes several stages over a long period of time. What If there was another way to achieve the same effect. Imagine a world where it would be possible for the broken fender of a car, to be reformed back in to its original shape in one step and with its structural performance intact and without the use of patches , glue or refill materials. Better yet let's take that concept a step farther. What if everyone could change everyday items like a plate in to a coffee cup and back.

The magneto-formic material is a compound designed to have the unique characteristics necessary to be reformed by magnetic forces and yet remain strong and durable enough to be used in every day applications. It is composed by a polymer with a relatively low melting point that is infused with ferromagnetic particles or sand. Once this material is in a malleable state its characteristics would resemble the performance of a substance known as magnetic putty, yet once it cools off and solidifies the resulting structure is strong and durable enough to be used in its respective applications. A specialized oven with the ability to create and maintain strong magnetic fields in a variety of shapes is used to bring the Magneto-formic material up to temperature, in a malleable state there by allowing it to conform to the shape defined by the magnetic fields in the oven.

Thus damaged, deformed or unwanted items made with the magneto-formic material can be fully recycled. This is an environmentally friendlier life cycle for parts and products. Since broken parts can be remade out of the same material, and unwanted products can be converted in to raw material that can be used at any point in the future instead of ending up in a landfill.

However this technology is not without its limitations. The shape and size of the items created with this method are being influenced by two factors, viscosity of the material and the shape that can be achieved by the magnetic fields induced by the furnace. In addition the larger the object the longer it takes for it to take shape and solidify.

As a proof of concept a tool was formed out of a crude version of the proposed material with the use of an oven mockup that used an array of electromagnets placed underneath a layer of Teflon plastic. The oven mockup is able to create shapes that are limited to the 1cm by 1cm grid and strictly on two dimensional shapes. A more sophisticated version of this furnace can be used to create object in three dimension and with a much higher resolution.

Rethinking the methods we use in manufacturing may be the only way to a truly sustainable future.